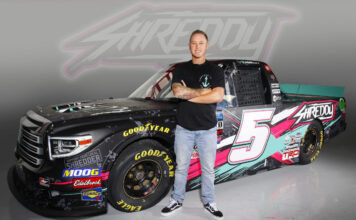 Shreddy Lyfe Clothing, a San Diego-based Calif. lifestyle clothing brand will serve as the primary marketing aboard the No. 5 DGR Crosley Toyota Tundra entry at Phoenix as well as next Friday night’s season-finale from Homestead-Miami (Fla.) Speedway on Nov. 15.

“We are stoked to be the exclusive apparel marketing partner for Dylan Lupton for the remainder of the 2019 season while already looking ahead to 2020,” said James Johnson, global sales and marketing director for Shreddy Lyfe.

“Dylan is a perfect fit for Shreddy Lyfe and relates not only to our brand but our customers as well. We are focused on building our Shreddy Racing division with Dylan on and off the track. He is a class act and talented race car driver and look forward to seeing our relationship enhance.”

Lupton, a native of Wilton, Calif. will make his sixth NGOTS start of the season in this weekend’s penultimate race of the year. The 22nd race of the season will be his fifth race with DGR-Crosley where he has achieved one top-five and three top-10 finishes in four races thus far.

“I am very excited and honored to announce my partnership with Shreddy Lyfe Clothing,” said Lupton, a NASCAR Next alumnus. “We’ve been working on this for a while and I’m thrilled to bring their style to NASCAR. I’m eager to see this partnership evolve.”

“Shreddy shares the artistic and apparel vibe of the lifestyle that I grew up around,” added Lupton. “I’ve had a strong season at DGR-Crosley and I’m looking forward to these next two races with Shreddy and hope we can continue to deliver strong finishes – if not a win over the next two weeks.”

Aaron Birdwell and Blake Wilkey, founders of Shreddy Lyfe say the addition of Lupton to the company’s platform is huge.

“My partners and I are proud to welcome Dylan Lupton to the family,” Birdwell said. “Huge things are to come ahead. With his guidance and impressive craft behind the wheel we look forward to tapping into the NASCAR world on so many levels.

“The future is bright.”

Lupton, 25, has experience in all three of NASCAR’s national divisions. From four starts in the Monster Energy NASCAR Cup Series to 35 races in the Xfinity Series, the avid racer is poised to make his eighth career NGOTS start Friday night under the leadership of crew chief Blake Bainbridge.

In its first year of operation, DGR-Crosley won 7 of 14 K&N East races, securing a driver and owner Championship. The team operates out of two buildings totaling 55,000 square feet in Mooresville, N.C.