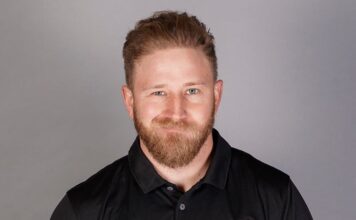 While everyone in the NASCAR community was disappointed to learn that the current race season has been put on hold due to the Covid-19 outbreak, it was particularly disheartening for Jeffrey Earnhardt.

After parting ways with sponsor iK9 and Joe Gibbs Racing in Aug. 2019, Earnhardt was set to make his Xfinity Series comeback this year after reuniting with JD Motorsports with Gary Keller for at least 12 races.

He previously drove for JDM in 2014, competing in a full Xfinity Series season, and is excited to team up with them again.

“Well the biggest thing is what they can offer,” Earnhardt explained. “It was the chance to run the most races and be competitive. Seeing what they were able to do with Ross (Chastain) showed they can do it if the funding is there.”

His first race was scheduled for Atlanta Motor Speedway on March 14 but it was postponed indefinitely until the current health crisis has resolved.

“It was heartbreaking, honestly,” he admitted. “I have been itching to get back behind the wheel and we were so close to doing so and then this happened. It just really sucked for everyone honestly and now it’s became a bigger struggle for all these teams to figure things out financially but also the sponsors that were promised these races are also on our minds.

“We have great sponsors that are very understanding. I think the effects of this mess have touched everyone and because of that I feel it’s only gonna make everyone stronger and more understanding. At the end of the day we will still try to always over deliver on any expectations and make all our partners proud.

“I just hope a cure comes soon and people remain safe.  It’s been very sad to see what’s been happening with the virus.”

There is no timetable for when the drivers will be able to get back to racing but NASCAR has mentioned the possibility of racing mid-week and double-header weekends.

Earnhardt and JDM are open to all of the options and the demands it may place on the organization.

“I’m all about it because I want to race every day I can,” he emphasized. “The stress comes from being a smaller team and having to have cars ready to go. Its gonna be a challenge but I know the guys at JD Motorsports can handle it.”

In the meantime, Earnhardt is focused on staying motivated and healthy.

“I try to be around the shop as much as I can and help out. Outside of that, like everyone, recently iRacing has become a big tool and trying to stay physically fit as well. Of course, getting outdoors and hunting when I can to keep my sanity.”

He is also taking advantage of iRacing, but says, “I’ve got to practice up because these guys are good and some have a lot of time on there.”

Earnhardt’s last race in the Xfinity Series was nine months ago at Chicagoland Speedway but he doesn’t think there will be much of a learning curve when racing resumes. If anything, he welcomes the challenge.

His goal for the season is to “back up and exceed what they did with Ross (Chastain), results wise.”

“Some of the guys at JD Motorsports I have worked with but it’s always a challenge in a new atmosphere. That being said, last year was all new to me and we came out of the gates swinging. I like that style.”

Earnhardt also had a message for his fans.

“We will always love their loyalty and support and when we get to go back racing there are gonna be some hungry drivers just waiting to put on one hell of a show for all the fans.”

Follow @angiecampbell_ for the latest NASCAR news and feature stories.

Angela Campbell
A native of Charlotte, NC, Angela (Angie) was first introduced to racing by her father. An avid fan of NASCAR, she found a way to combine her love of racing with her passion for writing. Angie is also an award-winning member of the National Motorsports Press Association. Follow her on Twitter @angiecampbell_ for the latest NASCAR news and feature stories.
Previous articleWilliam Byron puts on a clinic at Bristol
Next articleFront Row Motorsports Announces Support of Autism Society of America