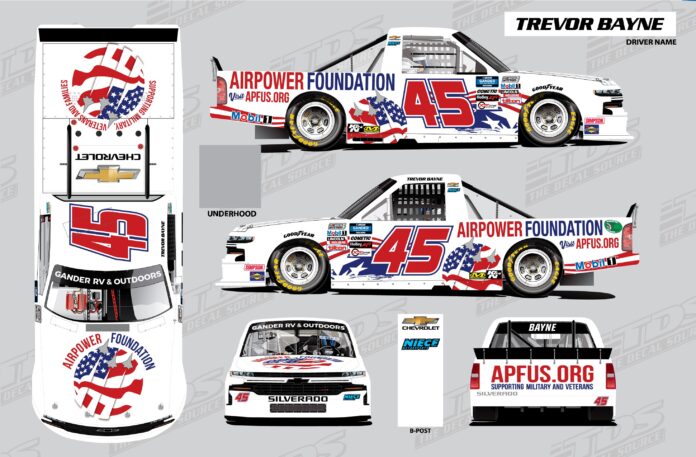 STATESVILLE, N.C. (Oct. 19, 2020) – The AirPower Foundation will join Niece Motorsports and Trevor Bayne as the primary partner at Texas Motor Speedway on October 25 and again at Phoenix Raceway in the season finale on November 6.

“Texas Motor Speedway has produced a lot of memories for me, including my first Cup start and my first XFINITY win,” said Bayne.  “I’m proud to have the AirPower Foundation on the truck for my first Gander Truck Series start at the track.  Our military and their families make such a sacrifice to defend and protect us, which is why I’m so thankful to be partnering with an organization that helps to take care of and support them.”

The AirPower Foundation was established by the nation’s oldest civilian military support organization.

“The AirPower Foundation is honored to have this opportunity to be the primary partner with Niece Motorsports and Trevor Bayne for the races in Texas and Phoenix,” said Sid Eppes, Chairman of the AirPower Foundation.  “These races will allow us to reach a very large audience to inform the public of the work we do, and the critical need for funding to further assist with the numerous requests we receive every day for assistance from the over 72 organizations we support annually across the country.  We sincerely thank Trevor Bayne for all his support, and we thank Al Niece for his service and his continued support of all who serve.”

Since its formation in 1999, the AirPower Foundation provides funding for programs dedicated to supporting active duty military, veterans, and their families.  AirPower also supports projects to assist wounded warriors, ill or injured service members, our GoldStar families of the fallen, veterans of previous wars and educational projects to make sure the next generation understands the honor and sacrifice of serving our country. AirPower is the only organization authorized by the Vietnam POW organization NAMPOW to support them.

“I’m thrilled for the AirPower Foundation to come on board with Trevor and our team,” said team owner Al Niece.  “Our military is near and dear to me, having served in the United States Marine Corps.  It means a lot to me to have an organization that supports our military members and their families on one of our trucks, especially at Texas and in Phoenix before Veteran’s Day.”

Bayne, a Daytona 500 Champion, made his return to NASCAR racing earlier this season, putting together several strong runs and contending for the win at Talladega Superspeedway, in just his fourth NASCAR Gander RV & Outdoors Truck Series (NGROTS) start.

While Bayne is relatively new to the NGROTS, he has no shortage of experience behind the wheel at Texas and Phoenix in NASCAR’s top-two series.

The Tennessee-native has 17 NASCAR Cup Series starts at the 1.5-mile track, in addition to nine NASCAR XFINITY Series starts, with a victory coming in 2011.

Bayne also has eight NASCAR Cup Series starts at Phoenix Raceway and 10 NASCAR XFINITY Series starts, where he has earned one top-five and six top-10 finishes.

The No. 45 AirPower Foundation Chevrolet will take the green flag at Texas Motor Speedway on Sunday, October 25 at 12 p.m. ET.  The 147-lap race will air live on FoxSports1, MRN Radio and SiriusXM NASCAR Radio.

Niece Motorsports is owned by United States Marine Corps Veteran Al Niece.  In 2020, Niece Motorsports enters its fifth season in the NASCAR Gander RV & Outdoors Truck Series.  Niece also owns Niece Equipment, which has for over 40 years provided clients with reliable products at competitive prices.  Niece Equipment’s reputation is built on service, integrity and dependability.  The company provides water and fuel / lube trucks that are engineered with quality and durability in mind for the construction and mining industry.  Follow the team on Facebook and Instagram @NieceMotorsports as well as Twitter @NieceMotorsport.

The Foundation is a 501(c)(3) non-profit with its roots dating back to 1958, when Air Force General Curtis LeMay and businessman/philanthropist Frank Kent created the Fort Worth AirPower Council dedicated to supporting the military community at Carswell Air Force Base.

The AirPower Foundation board of directors is a diverse group of professionals who volunteer their time and are dedicated to the proposition that freedom is not free. It is their noble mission to assist deployed military families, wounded service members, and veterans of past wars. They spend countless hours visiting military installations and families, assessing needs and grant requests. They are instrumental in providing leadership to organize and execute numerous projects every year in support of military families.  Follow the Foundation on Facebook @AirPowerFoundation Also on Instagram and Twitter @AirPowerFDN