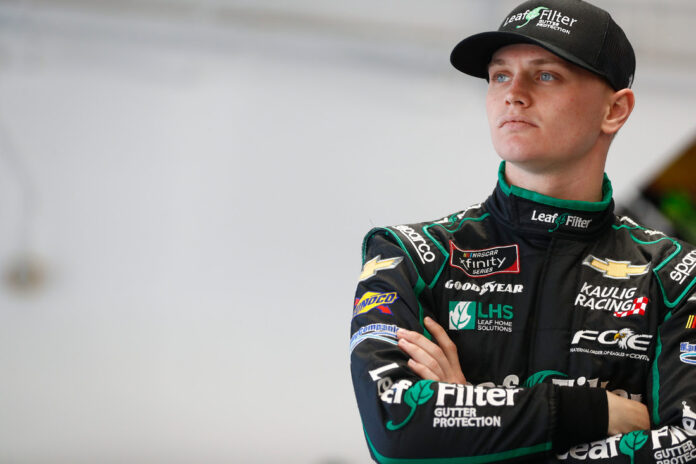 Justin Haley to Pilot the No. 11 Chevrolet for 2021 NASCAR Xfinity Series Season

(LEXINGTON, N.C.) October 19, 2020 – Kaulig Racing is thrilled to announce that Justin Haley will return to the No. 11 Chevrolet for the 2021 NASCAR Xfinity Series (NXS) season.

Haley, who originally signed on for a two-year deal with Kaulig Racing beginning in 2019, has signed a one-year extension, and will be the first driver to return for a third season with the team.

“I’d first like to thank LeafFilter Gutter Protection, Matt Kaulig, Chris Rice and everyone at Kaulig Racing for an amazing partnership the past two years,” said Haley. “We’ve grown as a team, an organization, and most importantly, as a family. I feel super blessed to have gotten the call from Kaulig Racing after my second win at Talladega that they wanted me back in 2021. They have believed in me since day one, and have stuck with me through the highs and lows. I’m extremely humbled to keep this strong partnership going into 2021 and continue trophy hunting!”

Haley also joined the likes of Dale Earnhardt and Dale Earnhardt Jr. as a driver to win three superspeedway races in-a-row following his win at Talladega Superspeedway earlier this month. The 21-year-old has since become one of 34 drivers, and the second youngest, to record a win in all three of NASCAR’s top-tier series.

“To have Justin Haley come back for a third year with us is beyond amazing for our team!” Said Matt Kaulig, owner of Kaulig Racing. “Everyone at Kaulig Racing loves Justin, and it is safe to say he has become an integral part of our family. Justin has only helped our program grow, and the proof is in the stats! I’m looking forward to many more wins and trophies with Justin in 2021.”

Haley and the team also made history together when they entered their first Daytona 500, the first-ever NASCAR Cup Series (NCS) race for Kaulig Racing, in February of 2020.

“Having Justin Haley return to Kaulig Racing for the 2021 season is truly special to me,” said President of Kaulig Racing, Chris Rice. “I had my eye on Justin for a while before he came to Kaulig Racing and knew there was something special about this kid. I was able to be a part of handpicking him for the No. 11 car, and there has not been one day that I have regretted that decision. I know he will do big things in 2021 for Kaulig Racing.”