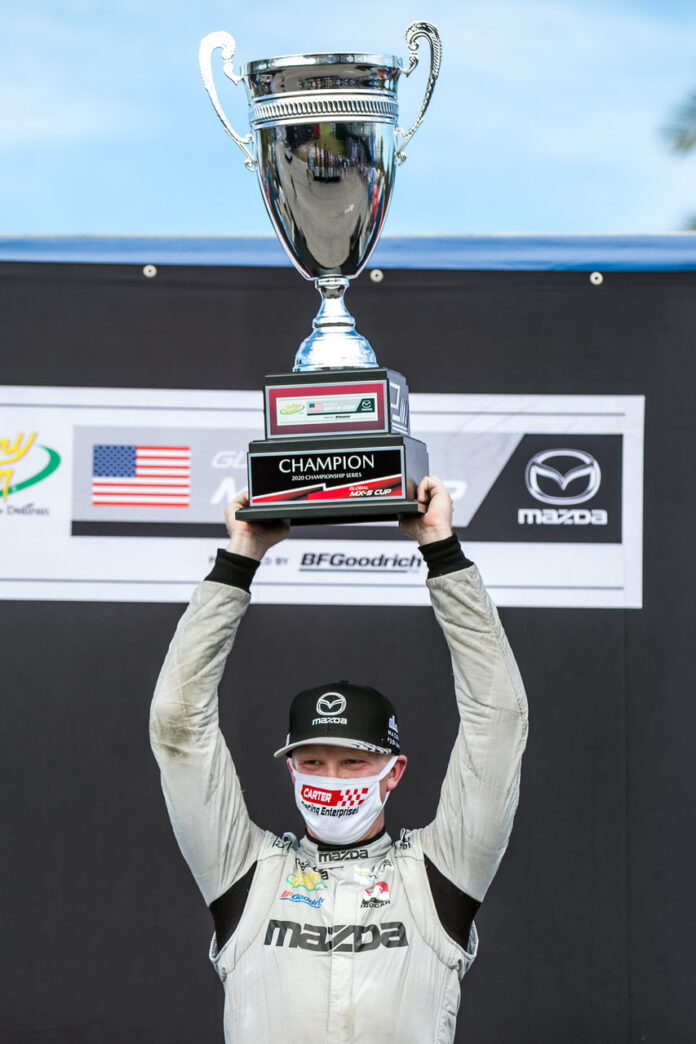 St. Petersburg, Fla. (24 October 2020) – After six Global Mazda MX-5 Cup presented by BFGoodrich® Tires event weekends, 12 races, and 314 laps of hard-fought competition, it came down to just a matter of seconds and a handful of points to determine the 2021 champion.

Robert Noaker (No. 13 Robert Noaker Racing/Slipstream Performance) won the battle in St. Petersburg on Saturday-securing the maximum points by setting the fastest lap, leading the most laps, and winning the race. But it was Michael Carter (No. 08 Carter Racing Enterprises) who emerged with 293 points from the season-long war to claim the championship title and the $200,000 support package that comes from Mazda to go along with it.

After a brief full-course yellow shortly after the start, Noaker moved into the lead of the race and established a five-second gap to the field. Meanwhile, Carter was mired in eighth and forced to fight his way forward if he had any hope of keeping Noaker from emerging with the title.

“We had a problem with the car on the first lap and we thought it was the motor,” Carter said. “I think it was some braking issues, like a caliper hanging. Then, it happened again after the first restart. I said this morning (in Race One) I had never driven a race car that hard, but I think this race topped it. I had no brakes at the end and I had to climb back to fourth just to get this championship.”

Racing for much of the 45-minute contest at a statistical tie, Carter was able to move up to fifth in the closing segments of the race, ensuring the championship lead. But there was still one more chapter of drama; Carter moved into fifth because Robert Stout (No. 3 White Racing) was stopped on course, setting up a final two-lap dash to the finish. Noaker managed the lead perfectly at the restart to maintain his advantage, but Carter also made the most of the opportunity to lock into fourth at the finish.

“I was not happy to see that yellow come out because I was in fifth and I would have won by like one point,” Carter said. “It was very stressful. At the beginning of the season I never would have thought that I would be here. We first set out with a goal when we built our first Spec Miata six years ago. We went to the (Mazda Road to 24) shootout and didn’t win it, and then came back two years later and won it. And I said I was going to win Rookie of the Year and win the championship, and here we are.”

Coming into the race, Noaker needed to win, lead the most laps and set the fastest race lap to have any chance of wrestling the Championship away from Carter. He ticked all the boxes and had it not been for a late-race caution, Noaker would have won by five seconds.

“I started third and was just trying to get to the lead and just drive away, and I was able to do it,” Noaker said. “It got really spread out there for a bit and the middle of the race was probably the longest 20 minutes of my life. I hated to see when the full course caution came out. But I want to congratulate (Michael) Carter for getting the championship – it was a close race.”

Noaker walks away from the 2020 season with four race wins, but four points short of the title.

“My dad told me before the first full course yellow that Carter was in ninth and to just drive away,” Noaker said. “I did that, but he’s just such a good driver and he came back through the field and just beat me by a couple of points.”

Jared Thomas (No. 96 Carter Racing Enterprises) bounced back from a tough Race One to finish second, putting a nice final touch on his Rookie of the Year season.

“It feels great to be back on the podium,” Thomas smiled. “We had a mechanical issue in the first race which wasn’t great so we started from the back. I felt like from practice and qualifying we had a good car. We figured we would have a pretty easy race and pick up a few spots. But the car was great in the race and the crew did a great job setting it up.”

Maverick’s Justin Piscitell (No. 9 Maverick) also ended his year on a high note with a run to third at the finish, the first podium for the new team. His climb also netted him Hard Charger honors.

“Closing out the year with a third place and getting the Hard Charger is a pretty awesome way to finish the season,” Piscitell said. “Obviously every race you want to be on the top step, but to be a new team with a brand new car, to be able to come out here and get a podium is pretty awesome. We had been getting better every race and we kept working hard. I have to thank [team principal] Shea Holbrook, crew chief Tim Buck and the whole crew over at Maverick for all of the hard work.”

“I think this is exactly what we expected for this season. I raced (in the series) back in 2009 and 2010 and the field is always extremely tight—any of the top 15 guys can win. You need to have the cars really well sorted and it was never easy to come in as a new team. I think all things considered, we did a pretty awesome job progressively getting better every race.”

Following Carter across the line was Selin Rollan (No. 87 Spark Performance), who completed the top five.

As the Global Mazda MX-5 Cup ends its 2020 season, it also ends a five-year partnership with IndyCar. Everyone in the series wishes to thank the IndyCar officials, staff and corner workers for their impeccable work keeping us safe and putting on a good show.

Information on the 2021 MX-5 Cup season will be available shortly.