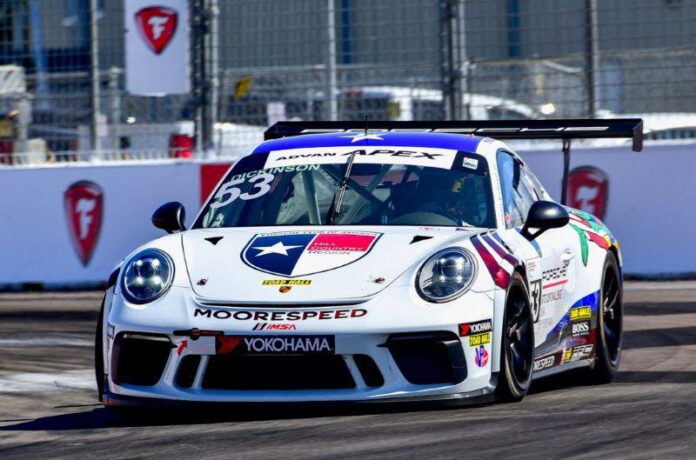 St. PETERSBURG, Florida (October 25, 2020) – Riley Dickinson and Moorespeed scored a repeat overall and Platinum Cup race finish Sunday in the final round of this weekend’s IMSA Porsche GT3 Cup Challenge USA by Yokohama doubleheader at the Grand Prix of St. Petersburg in the No. 53 Moorespeed Porsche 911 GT3 Cup.

As he did in yesterday’s first 45-minute race, Dickinson charged from third on the grid to second at the race start, but that is where the similarities between the Saturday and Sunday sprints ended.

Saturday’s opening race was a caution-filled affair with more laps run under the yellow flag than green flag racing conditions. Dickinson was forced to settle for second after never having a chance to battle for the lead.

Sunday couldn’t have been more different with the race flat-out and clean-and-green for the entire 45 minutes. Dickinson and Moorespeed made the most of it and kept the No. 53 in the mirrors of Saturday race winner Jeff Kingsley for the most of Sunday’s finale.

“We got to race today, and we raced really hard,” said Moorespeed President David Moore. “I’m proud of Riley’s performance. He got a great start, moved from third into second before the first lap was complete, and put pressure on Kingsley the entire race. He even struggled with some aero imbalance because he was so close. I saw Kingsley’s team owner Jeff Stone after the race, and he said ‘man, it was a 45-minute qualifying session.’ Riley would set a quick sector time and then Jeff would set a quick sector. I thought they were going to actually beat the qualifying time for a second and they came damn close in a race that was hot as hell.”

Dickinson was never more than 1.5 seconds behind Kingsley and steadily closed the gap in the second half of the race. He moved the No. 53 to within a half a second of Kingsley in the race’s final 12 minutes only to suffer a slight miscue that sent him into the Turn-10 runoff. Dickinson quickly recovered and maintained second place to the finish despite the run off course.

“At the end of the day, we had a great event all around,” Dickinson said. “It was truly a great team effort for all parties involved. We can be very happy with that. On my side, I’m happy with my performance even though I did have the one mistake that ultimately cost us on Sunday, but that’s because I was pushing 12-tenths the entire time. It was 45 minutes of qualifying. At the end of the day, we’ll take all the good, learn from it, move on to Sebring and see what we can get down there.”

“Riley gave it everything he had and then some today,” Moore said. “He made a little mistake because he was pushing so hard to try to take it to him. I can’t fault him at all. It was 100 percent all in on a ridiculously hot day. He got out of the car and he was spent like I’ve never seen him before, and he’s a physically fit young man. I’m really proud of his effort. We’re going to go to Sebring with our heads high and give it 110 percent again and see if we can’t be on the top step next time.”

About Moorespeed: Based in Austin, Texas, Moorespeed is a full-service automotive company specializing in sales, service, repairs and restoration of luxury sports cars and competition on the track in numerous North American road racing series. Founded in 1991 in Austin by brothers David and Chris Moore, Moorespeed offers comprehensive, turn-key service in which people are just as important as parts and relationships are just as vital as results. David Moore and Winslow Mankin, GM – Director of Customer Racing, welcome and work with every customer as a member of the Moorespeed family, regardless if they are racing or enjoying their sports car on the open road. Moorespeed’s road racing programs are designed for all skill levels, and driver development, both on and off the track, is a Moorespeed specialty. Moorespeed is all about the passion for high-performance automobiles and the people who drive them. A commitment to personal service and performance permeates every corner of the company. Learn more at www.moorespeed.com, and contact us at (512) 474-7223. Look for us on Facebook at www.facebook.com/MoorespeedRaceEngineering and Twitter @MoorespeedTX.