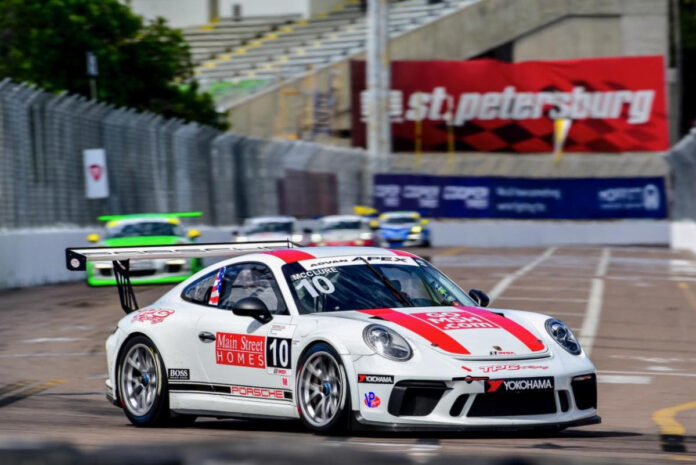 Castro Earned Second Podium of the Weekend, With McClure and Hardee in Class Top Fives

McClure started the race with his No. 10 Main Street Homes/TPC Racing Porsche 911 GT3 Cup on the Platinum Cup Masters pole before dropping to third at the start, while Castro worked in reverse – taking the lead at the start in the No. 65 Fine Fare Supermarket/TPC Racing.

The 20-minute mark of the 45-minute race turned out to be the key minute for TPC Racing.

Castro’s Gold Cup car produces less horsepower than the newer-model Platinum Cup cars, but Castro often carries more speed through the corners than his fellow competitors. On a tight, twisty street circuit like St. Pete with few long straightaways, his Gold Cup car is often held up by slower drivers in the quicker Platinum Cup car – including a new Gold Cup track record best lap of 1:17.354 (83.770 mph) in Sunday’s race.

Because he was running so close, Castro had to slow his pace to get more air into his Porsche radiator and cool his engine. With that, the gap he had built on second place faded, giving championship rival Curt Swearingin an opportunity to make a move. Castro lost the lead with 20 minutes to go, dropping to second. At nearly the same time McClure, running select events in the 2020 season, moved into the lead under braking in Turn 10 temporarily, but spun getting back on the gas and fell to the end of the field.

Castro held on for second, while McClure would finish fourth – battling back for a chance at third but not quite landing on the podium.

Hardee recovered from a difficult Saturday, where debris lodged in his radiator and ended his day just two laps in, to run a strong fifth in Platinum Cup Masters on Sunday. Back in March, the The ever-improving Hardee cut 2.2 seconds from the weekend’s Practice 1 time, and a full second off of his qualifying time, during Sunday’s race.

Vernon McClure, Driver, No. 10 Porsche 911 GT3 Cup (Platinum Cup Masters): “Today was hard, but I was excited to get back into the car. I was first again in Masters, sixth overall, and Charlie Luck jumped me a little bit and got in front of me but I was behind him the whole first part of the race. I knew I had the speed. I got around him in Turn 10 but didn’t realize I downshifted to first when I went by him. I had a little steering angle and got on the gas and it just looped on me. I was stuck right there in Turn 10 and couldn’t get it going again. I had to let the whole field go by. But I got back on it and had a chance for third again. I got back up on Charlie, but couldn’t quite get it. It was a good race, I had a lot of fun, and love the track.”

Efrin Castro, Driver, No. 65 Porsche 911 GT3 Cup (Gold Cup): “I drove the best I could under the circumstances. We had a green flag for most of the time, which was great. I was held up by some of the guys in the front in the slow part of the course. The car started overheating so I had to back up a bit. That gave Curt an opportunity to catch up to me, and it just didn’t go my way. Luck wasn’t on our side. It was just things we couldn’t avoid. That cost us a victory, and we had to settle for second. We had the fastest lap of the race, which was my fastest lap of the weekend. It’s a tough loss because I know we had the pace, I know I could have won here. The scenario of the whole race was what cost us the win.”

Dan Hardee, Driver, No. 69 Porsche 911 GT3 Cup (Platinum Cup Masters): “We came here in March and we got to do one practice. My fastest lap today compared to then was 2.5 seconds faster. I owe a lot of that to my coach, Moritz Kranz. He had me carry more speed and braking through the corners. But it’s grueling. I feel like I’ve done a couple of rounds with Holyfield. It’s a street fight, and it’s an endurance race, all at once.”