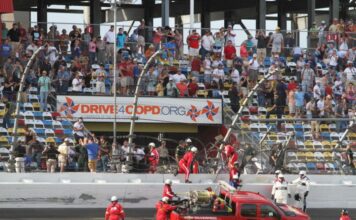 Some off-season moves have been announced in the NASCAR Camping World Truck Series and Newman will be featured in a season documentary.

GMS Racing has announced that Raphael Lessard will drive in select races in the 2021 NASCAR Camping World Truck Series (NCWTS). The agreement will be for 12 races and to be determined over the season but the first race of the 2021 NCWTS season will be at Daytona on Feb. 12, 2021.

“We are very excited to have Raphael join GMS Racing for part of the 2021 season,” said Mike Beam, President of GMS Racing. “I believe Raphael will be a great addition to our GMS stable and I look forward to seeing him wheel one of our Chevrolets.”

Lessard had one win, four top-five and six top-10 finishes in 2020. Lessard along with Coral bookmaker, will be a great pick to win at the “World Center of Racing” in February and is likely to prove a popular bet amongst fans in the markets on the event.

“Finding myself with the best team of the 2020 season is unbelievable. They won the championship! I can’t wait to show what we can do aboard such great machines. The team knows how to bring potential winners at every race, a key to a great season. Our team will be great, and I can’t wait to be back on track.” Lessard said.

The team will be seeking sponsorship to participate in all of the 22 events on the 2021 Truck Series schedule.

Truex will run the full 2021 schedule for Niece Motorsports

Ryan Truex will drive the No. 40 Marquis Spas Chevrolet Silverado for Niece Motorsports for the full 2021 Truck Series schedule. Truex competed in nine races with Niece Motorsports throughout in 2020 with two 12th place finished at Las Vegas Motor Speedway and Kansas Speedway.

“I am excited about the continuity we will be able to build, competing week in and week out. I’m thankful to Marquis Spas for their support this season and as we move into next season.” Truex said.

Ryan Newman’s episode, Now or Never, debuted on Nov. 14, exclusively on the MotorTrend app. The episode picks up after a whirlwind summer when NASCAR returned to ‘The World Center of Racing’ for its final race in the regular season. As part of the episode, Newman returns to the site of his horrific crash in which he was mere feet away from his second Daytona 500 trophy and picks up Newman’s life and outlook in the weeks and months following.

Under Pressure to air on broadcast television will be announced at a later date. Additional episodes will continue to air until Dec. 12.