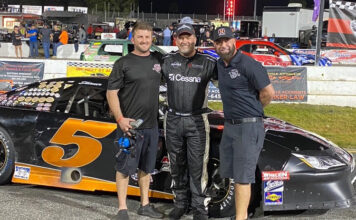 NEW SMYRNA BEACH, Fla. (January 3, 2021) – Mike Skinner finished second in the 50-lap Pro Late Model feature at New Smyrna (Fla.) Speedway as part of Saturday night’s Red Eye 50/50 event. It was the first time back in the driver’s seat at a late model race since 2019 for the 63-year-old racer, and another chance to race with his sons, Jamie and Dustin Skinner.

“Getting to race tonight was my Christmas present from my son, Jamie,” said Skinner. “I didn’t know if I’d get to race again, but we were together for Christmas Eve last week and he said, ‘Pops, how would you feel about racing a Pro Late in the Red Eye?’ and here we are with Racecar Solutions on the hood. It’s always such a treat to get to come out and race with my boys, but now I’ve caught the bug again.”

Racing the No. 5 Racecar Solutions Toyota, Skinner started in the fifth position. By lap eight, he was already starting to pick up positions, and by lap 18 he slid into the second position. With the leader already having a 1.622-second gap and the field working through lap traffic, Skinner needed a caution to bunch the field back up and make a run at the lead. However, the race stayed green all night and Skinner came home in the runner-up position.

“We’re only two days into it, but 2021 is turning out to be a pretty exciting year. Angie and I will be partnering with Featherlite Coaches this year to explore America and share our love of motorcoaching. And I was able to climb back in a race car, which honestly, I didn’t know when or if that would happen again. We were a bit too free all night tonight, but at the end it all came down to track position. More than anything, finishing second just adds the fuel to the fire and gets me wanting to come back out here and win a few more races. We’ll need to find some sponsorship, but hopefully we can put something together for Speedweeks and come have a little fun.”

In an impressive showing for Racecar Solutions, all three of the team’s cars finished in the top five. Jade Buford, driving the Big Machine Vodka Toyota finished fourth, and was followed by Jean-Philippe Bergeron in fifth. It was the first start with Racecar Solutions for both of the up-and-coming drivers.

Official Release
Previous article
Speculation, questions arising from Hendrick’s pick of Larson’s spotter for ’21 season
Next article
How To Protect Your Truck From The Elements