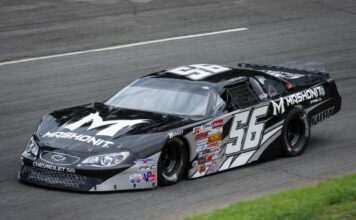 Dean, a native of Bluffton, S.C. is a former podium finisher in the annual winter Super Late Model event and with a focus during the offseason on preparing for an aggressive Super Late Model schedule in 2021, Dean is excited to head back to a track of familiarity and kick off the New Year with success.

“I’m looking forward to getting back in a race car,” said Dean, a two-time winner in the ARCA Menards Series. “It’s been a fun offseason with my family – but being a racer, I can’t wait to get back to the track – especially New Smyrna and see what kind of performance we can deliver.”

Dean will drive the No. 56 MASHONIT Apparel Co. Chevrolet in Saturday night’s race in a collaborative effort between Dean Racing and DLP Performance.

New Smyrna’s 0.5-mile oval is one of the tracks that Dean – a veteran NASCAR Camping World Truck Series (NCWTS) driver has turned hundreds if not thousands of laps over the years.

Between the Red Eye and his yearly participation in the World Series of Asphalt – Dean knows what he is looking for when it comes to the handling of his race car.

“I like racing at New Smyrna,” added Dean. “I better by now (chuckles). It’s a fun race track where horsepower can be crucial – especially when you trying to come off the corner and try to gain that acceleration down the straightaways.

“Everyone at Dean Racing and DLP Performance has worked extremely hard to prepare for this race and while another podium finish would be a great way to kick off 2021, but we’re going loaded for victory – anything less than that would be a little bit of a disappointment.”

With some COVID-19 protocols still in place this weekend at New Smyrna, Dean won’t have much time to waste to capture the checkered flag. With just a 50-lap race on deck, the shortened race turns into a sprint which means the race could ignite some aggression.

The South Carolinian knows he’ll need to be aggressive in qualifying and throughout the race to contend for the win – but also knows stepping over the line could put him out of the race too.

“Such a huge race like this will come down to just 50 laps – so you kinda revert back to the World Series of Asphalt week mentality,” Dean explained. “If you have a lousy qualifying lap – you could be spending the race just trying to come from the back to the front.
“So, that’s why it is important for us to have No. 56 MASHONIT Apparel Co. Chevrolet dialed in during practice and then tweak on the car after qualifying and be prepared for battle. From there, it’s win – or bust, but we sure are going to have a good time racing this weekend too.”

MASHONIT Apparel Co. (MASHONIT.com) is a brand for those that live life wide open. The people that look at something normal and think, “That’s not good enough,” “It can go faster” or “Let’s see what this thing can do.”

Those that have the hunger inside that keeps them just south of normal.

That never-ending hunger for speed and adrenaline that allows you to find the thin line between being heroic and insane, giving them a perspective on life that few are lucky enough to find.