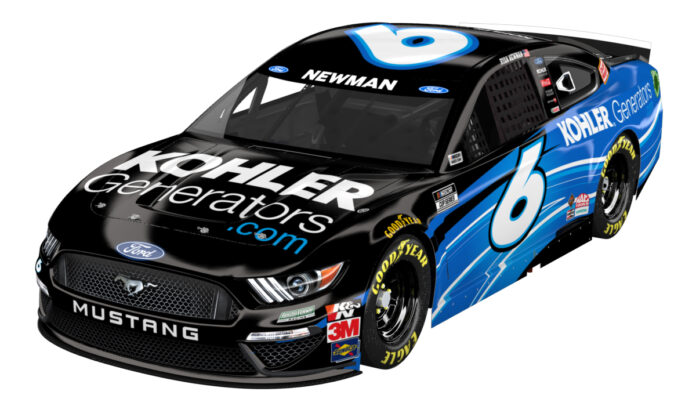 Kohler Generators to premiere on Ryan Newman’s No. 6 Ford at Famed Daytona 500

“We are looking forward to getting back to Daytona this year, and bringing on Kohler Generators as the primary partner for our biggest race of the season is really exciting,” said Newman, who was seconds away from winning his second Daytona 500 last season. “KOHLER is one of the most trusted brands in the world and is a natural fit with Roush Fenway and the No. 6 team. We came very close to winning this race last season, so hopefully this year we can go to Daytona, finish the job and put that Kohler Generators Ford in victory lane at what is undoubtedly one of the grandest events in all of motorsports.”

Newman, the 2008 Daytona 500 Champion, enters his 20th full season in the NASCAR Cup Series, and third behind the wheel of Hall of Fame Owner Jack Roush’s iconic No. 6 entry. The 43-year-old veteran was seconds away from winning the 2020 edition of ‘The Great American Race,’ before a horrific crash at the finish line. Newman, who was hospitalized after the accident, was released less than 48 hours later and made a miraculous return to the track after having missed only three events.

Roush Fenway boasts a pair of wins at the Daytona 500, taking the celebrated checkered flag in 2009 and 2012, with the latter serving as Roush’s historic 300th NASCAR victory. Overall, RFR has won seven times at ‘The World Center of Racing’ in NASCAR’s premier series, most recently in the 2017 summer race.

“We are pleased to welcome Kohler to the Roush Fenway Family,” said NASCAR Hall-of-Fame owner Jack Roush. “We share the same pursuit of high performance in both of our fields, and I cannot think of a better place to kick off the partnership than Daytona.”

“Our partnership with Roush Fenway Racing and driver Ryan Newman provides new opportunities to showcase the leading-edge design, technology, and reliability of KOHLER Generators with passionate and loyal NASCAR fans. Jack Roush’s hall of fame career and championships speak to his hard-earned reputation of excellence,” said Brian Melka, Group President – Power at Kohler Co. “Bringing together Roush Fenway Racing and Kohler, along with a highly decorated competitor in Ryan Newman, is exciting and reinforces our shared commitment to power and technology, and an inner drive to always achieve the highest level of performance. We are thrilled to unveil the sleek blue Kohler Generators No. 6 car at the Daytona 500, as well as Road America which is less than 20 miles from our world headquarters in Kohler, Wisconsin.”

Daytona 500 qualifying is set for Wednesday, Feb. 10 to determine the front row for the 63rd running of ‘The Great American Race.’ The Duels – the twin 150 mile events that determine the remainder of the starting lineup – are slated for the following night, with the Daytona 500 to follow on Sunday, Feb. 14, at 2:30 p.m. ET on FOX.

About Kohler Co.
Founded in 1873 and headquartered in Kohler, Wisconsin, Kohler Co. is one of America’s oldest and largest privately held companies comprised of nearly 35,000 associates. Kohler is a global leader in the manufacture of kitchen and bath products; engines and power systems; premier cabinetry, tile and lighting; and owner/operator of two of the world’s finest five-star hospitality and golf resort destinations in Kohler, Wisconsin, and St. Andrews, Scotland.

About Roush Fenway Racing
Roush Fenway Racing is one of the most successful teams in NASCAR history, fielding multiple teams in NASCAR Cup Series. Set to begin its 34th season in 2021, Roush Fenway is a leader in driver development, having launched the careers for many of the top drivers in the sport. Off-track, Roush Fenway is a leader in NASCAR marketing solutions, having produced multiple award-winning Social Media, digital content and experiential marketing campaigns. Roush Fenway is co-owned by NASCAR Hall of Fame team owner Jack Roush and Fenway Sports Group, parent company of Major League Baseball’s Boston Red Sox and English Premier League’s Liverpool F.C. Visit RoushFenway.com, become a fan on Facebook and Instagram, and follow on Twitter at @roushfenway.