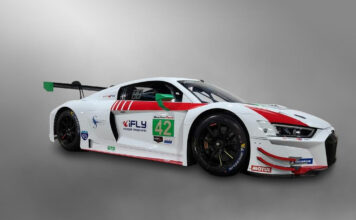 DALLAS, Tex., (January 15, 2021) — One year after making their IMSA debut in the Michelin Pilot Challenge, NTE Sport is climbing up the motorsport ranks to compete in the WeatherTech SportsCar Championship, racing an Audi R8 LMS in this month’s Rolex 24 At Daytona. The team, led by owner Paul Mata will run the No. 42 machine in the 24 hour endurance racing event, driven by Alan Metni, Andrew Davis, J.R. Hildebrand, and Don Yount.

“It’s great to be able to build on our first year in the Michelin Pilot Challenge to be able to run in the GTD class this year at such an iconic event,” said Mata. “The field looks incredibly stout, and this year’s race looks like it will be highly competitive.

After three years of competition in the Porsche GT3 Cup Challenge USA by Yokohama, Alan Metni will be making his IMSA WeatherTech debut in the Rolex 24 At Daytona. Metni earned six podiums and one win in his 16 races last season, finishing fourth in the overall championship standings. While this will be Metni’s first Rolex 24 At Daytona, he still has endurance racing experience, earning class wins at the Creventic 24 Hours of COTA in 2017 and 2018.

“I am looking forward to my first Rolex 24 At Daytona,” said Metni. “I am happy to be racing it with my coach and friend Andrew Davis, who has been coaching me since the Porsche Club of America. I appreciate the help and support of Audi Glenwood Springs.”

Andrew Davis joins the team as the established sports car racing veteran, with two decades of professional racing under his belt, he holds 58 podiums, 20 wins, and two championship titles to his name. While still nowhere near the age of retirement, Davis’s sports car racing resume is long enough to wrap around Daytona International Speedway. In the 2020 season, Davis managed to compete in the IMSA WeatherTech SportsCar Championship GTD class, Pirelli GT4 America SprintX championship, and the Michelin Pilot Challenge, a triple duty season he is all to familiar with. Davis will be the only driver on the team having raced previously in the Audi in processional competition, running both the Team Hardpoint and Moorespeed machines in the 2020 season.

“I’m very much looking forward to this exciting opportunity to join NTE Sport for the Rolex 24 Hours of Daytona,” said Davis. “This will be my 19th start in the grueling twice around the clock race, and my fifth time behind the wheel of the Audi R8 GT3 LMS. I’m very happy to be continuing my strong relationship with Audi Sport customer racing, and I look forward to helping the team maximize performance both on and off the track. Adding to the excitement for me personally is the chance to share the experience with my long-time coaching client and friend, Alan Metni. It will be his first attempt at the race, so I’m eager to help him navigate through all the unique challenges associated with this particular race.”

Although this year’s event will be his first Rolex 24 At Daytona, J.R. Hildebrand is no stranger to the ranks of professional motor racing. Winner of the 2009 Indy Lights championship, multiple podium finisher in IndyCar, and Rookie of the year in the Indianapolis 500, the Californian has a strong track record to bring to the rookie team. He raced in the American Le Mans Series with Genoa Racing, competing in the 12 Hours of Sebring and Long Beach Grand Prix, earning podium finishes in both races. Most recently, Hildebrand finished second in the 2018 Pikes Peak International Hill Climb, racing a Porsche Cayman GT4 Clubsport. The following year, he joined the Americas Rally Ross, earning one podium and three top-five finishes in four events.

“I can’t wait to join the guys down in Daytona and looking forward to my first Rolex 24,” said Hildebrand. “It’s such a great way to kick off the year and I’m excited for the challenges it presents. Over the last few years I’ve ventured outside of IndyCar more often and every time it reminds me why I love getting behind the wheel even more. The IMSA calendar has so many of the iconic U.S. circuits on it, some of which I haven’t raced on since F2000 but still love, adding Daytona to my schedule this year is great and hopefully there’s more to come.”

Don Yount first joined IMSA in 2014, finishing sixth overall in the Prototype Lites series. Since his debut, Yount has competed in IMSA’s Prototype Challenge, Michelin Pilot Challenge, and the WeatherTech SportsCar Championship. Most recently, he earned a podium in the LMP2 class in the 2020 Twelve Hours of Sebring.

“I’m looking forward to returning to the Rolex 24 At Daytona,” said Yount. “Paul Mata at NTE Sport has done a great job getting this program together, and I think we have a strong lineup heading into the Roar and Rolex. The competition will be tough, but we’ve been working hard to make sure we execute well and have a chance to fight for that win.”

The 59th Rolex 24 at Daytona will feature five different classes of sports cars competing in one race over the course of the 24 hours. Participants will have to not only have to compete within their class for position, but expertly maneuver their way through faster or slower traffic, while perfectly executing pit stops, and optimizing car performance. Competitors will have a three day test a week before the event officially begins. The Roar Before the 24 will run from January 22-24 and will conclude with a 100-minute qualifying race to set the starting grid for the Rolex 24. The Motul Pole Award 100 will take place Sunday, January 24 at 2:05PM Eastern, streaming live on TRACKPASS via NBC Sports Gold. For full event and coverage information, visit imsa.com.