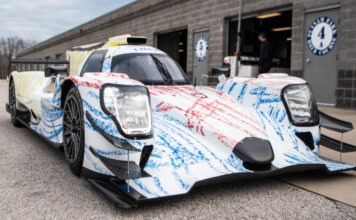 INDIANAPOLIS, Ind., (January 17, 2021) – The 2021 Rolex 24 at Daytona will see the return of Era Motorsport to the IMSA WeatherTech Sports Car Championship, which the team will celebrate by sporting a livery inspired by a design from a young fan from Ottawa, Canada. Six-year-old Owen, who is a third-generation race fan, beat out submissions from all over the world to have his drawing grace the No. 18 Oreca LMP2 car for the season opening event.

The livery contest began in early 2020, when fans were originally invited to submit livery designs for the Petit Le Mans season finale in October. Plans and race schedules changed as COVID spread, and word of the contest grew as countries all over the world shut down, resulting in fans spending more time at home and online.

As the world went through the early days of COVID, Owen’s father, Jason saw his industry come to a halt, and transitioned to become a full-time dad and homeschool teacher. Like most parents, he spent each night looking on the internet for learning opportunities and activities for his children. Jason’s own father was an enthusiastic fan of racing, creating some of his son’s favorite memories by taking him to Canadian Tire Motorsport Park to watch races in the summer. Jason’s passion for motorsports grew and once his son Owen turned three, he began bringing him to race events to continue the tradition, even teaching him how to drive on his racing simulator. Jason visited the IMSA website one night and discovered the Era Motorsport livery competition, printing out the blank template for Owen to color.

Owen’s finished design glowed bright with all three primary colors, transitioning from a blue nose, to a yellow middle body, and a red rear. On the side of the car’s body, he added a lightning bolt. Jason submitted the photo of the proud six-year-old holding his masterpiece.

As the months progressed, Era Motorsport received a wide variety of designs from fans, all competing for their drawings to land on a professional sports car. When a crash during a practice session at the 24 Hours of Le Mans halted the team’s plans to finish out their rookie IMSA season, the contest was also subsequently sidelined. However, as the team began to build their 2021 IMSA program, the submissions were revisited.

“It was so great to see so many interesting designs from so many sports car fans and aspiring designers,” said team owner Kyle Tilley. “We hope we gave them something to do during what has been a tough time for everyone. In the end, we reviewed all the images, and we knew the Owen’s drawing was the winner. He clearly loves racing, and we hope this gives him an experience he’ll never forget.”

Once notified that his design would land on a professional race car for the biggest race of the year, Owen submitted the following thank-you note:

Thank you for this contest. My name is Owen and I am 6 ¾. My favorite things are racing and hockey. I am learning to drive on a racing simulator. I chose this design because I like the colours and thunderbolts and flames are cool.

This was fun because my grandpa, dad, and me all like racing and we were stuk at home during COVID.
Owen.

In addition to seeing his artwork on a professional race car on national television, the team has invited Owen and his father to attend an IMSA event as their personal guests, likely to be once COVID restrictions are lifted, when fans are allowed in the paddock again.

The special one-off livery will make its on track debut at the Roar Before the 24, the first official test of the 2021 season. The first session will take place on Friday, January 22, followed by a series of practices and then a race to determine the starting grid for the Rolex 24 At Daytona the following weekend. The 59th Rolex 24 at Daytona will begin Saturday, January 30 at 3:40PM live on TRACKPASS via NBC Sports Gold. For more information, visit imsa.com.

About Era Motorsport
Era Motorsport was formed in 2018 with the idea of providing unmatched excellence in historic racing. Just two years later, the team expanded to the world of professional sport car racing, fielding an Oreca 07 in the prolific IMSA WeatherTech SportsCar Championship and the 24 Hours of Le Mans. Motorsport isn’t just a hobby, it is a way of life: a passion that is in the team’s blood. Whether you find us in the IMSA WeatherTech paddock with modern prototypes or chasing down lap records in our fully restored classic sports cars, or even globetrotting to experience historic F1 at some of the world’s most iconic circuits, Era Motorsport has something for everyone. In 2021, the team will return to the IMSA WeatherTech SportsCar Championship for limited events and also contest in the full season of the Asian Le Mans championship.