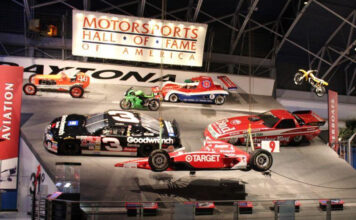 Just before the holiday season, a crew from Orlando-based Nassal removed two vehicles from the soaring exhibit of historic racers and replaced them with two others over the course of two days. It’s the first major refresh of the Sweep of Speed since 2016 – the year the MSHFA museum opened in the Ticket & Tours Building at DIS following its move from Michigan.

“Any time you come to the Motorsports Hall of Fame of America here in Daytona you can be sure you’ll see some of the greatest American racing vehicles ever,” MSHFA President George Levy said. “Sometimes that literally involves reaching for the sky.”

The two-day transformation was captured in a 90-second time lapse video available at www.mshf.com and through the link below.

The Sweep of Speed features a 31-degree slice of Daytona International Speedway’s famous high-banked turns. A pack of historic vehicles across motorsports disciplines are mounted on the banking, with others suspended from the roof behind them.

Viewed together, these machines jockey in timeless, overhead competition toward an ever-elusive checkered flag.

Moving precious four-wheeled artifacts requires patience and skill. Nassal’s crew employed cranes, pulleys and teamwork to detach the Lola and the Watson roadster from the banking on the first day and installed the Ickx Can-Am champion and Dixon Indy 500 winner the following day.

﻿Access to the MSFHA is included with every Daytona International Speedway tour, which run throughout each day, or as a museum-only ticket. The attraction is open daily nearly year round except holidays and on major DIS race and event days.

About the Motorsports Hall of Fame of America: The MSHFA is the only hall of fame that honors achievers in all forms of American motorsports: cars, motorcycles, airplanes, off road and powerboats. Induction is decided by a straight vote among 200 experts, about half of them inductees themselves. Its mission is to celebrate and instill the American motorsports values of leadership, creativity, originality, teamwork and the spirit of competition. It was founded by Larry G. Ciancio and Ronald A. Watson and conducted its first induction in 1989. Watson spent the next 30 years tirelessly building it into the nation’s premier motorsports hall of fame until his sudden passing in 2019. The original museum in Novi, Mich., relocated to Daytona Beach, Fla., in 2016 and greets more than 100,000 visitors a year. The MSHFA is operated by the nonprofit Motorsports Museum and Hall of Fame of America Foundation, Inc.

KYLE LARSON, NO. 5 HENDRICKCARS.COM CAMARO ZL1 1LE – Race Winner: “Yeah, thanks. It was such an awesome race car. Cliff (Daniels, crew chief) and everybody did a great job preparing this piece."
Read more
NASCAR Cup PR

BRAD KESELOWSKi, No. 2 Discount Tire Ford Mustang - WHAT DID YOU SAY TO KYLE LARSON? “I’m just really happy for him."
Read more