Drew Dollar to Compete in Eight Races in the No. 51 Tundra 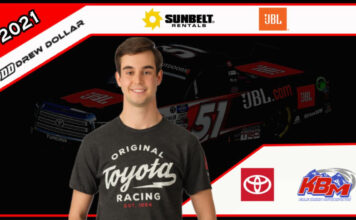 MOORESVILLE, N.C. (Jan. 28, 2021) – Kyle Busch Motorsports (KBM) announced today that Drew Dollar will make eight starts behind the wheel of the organization’s No. 51 Tundra in the NASCAR Camping World Truck Series in 2021 with Mardy Lindley as his crew chief. Dollar’s Tundra will feature primary sponsorship from Sunbelt Rentals, the premiere rental company in North America, JBL, the authority in engineering superior sound, and another sponsor to be named later.

The Toyota Racing Development driver finished fourth in the ARCA Menards Series championship standings in 2020 after recording one win, four top-five and 14 top-10 finishes across 20 starts. Dollar led 40 laps en route to his lone series victory at Talladega Superspeedway last June. He also finished inside the top 10 in both of his ARCA Menards Series starts in 2019, including a sixth-place finish in his series debut at World Wide Technology Raceway at Gateway. In addition to his part-time Camping World Truck Series schedule this season, he will also run 13 races on the ARCA Menards schedule this year.

“It’s an amazing opportunity to be taking the next step in my career running a part-time schedule in the Camping World Truck Series this year with Kyle Busch Motorsports and Toyota,” Dollar said. “I have a lot of hard work ahead of me learning a new series and driving a Tundra for the first time, but I’ll be surrounded by some of the best people in the industry. I look forward to the challenge. Thank you to all of my partners for supporting me and making this opportunity possible.”

“We’ve put an eight-race schedule together for Drew this year that will allow him to continue his development as a driver as he makes his first venture into the Camping World Truck Series,” Busch said. “Drew’s schedule includes several tracks where he was successful in the ARCA Menards Series last year, including Talladega where he won and Daytona where he finished third. We felt it was important to have him in the truck for stretches of races to give him consistent seat time and help the communication between him and Mardy Lindley. As a former driver himself, Mardy has been a great mentor to several young drivers in recent years, and we’re looking forward to seeing what he and Drew can do together this year.”

Dollar recorded two top-five and seven top-10 finishes with 49 laps led across eight NASAR K&N Pro Series East starts in 2019. He earned his first late model victory at South Boston (Va.) Speedway in June of 2019 and racked up numerous top-five and top-10 finishes that year. The Georgia native began his racing career in Bandoleros at Atlanta (Ga.) Motor Speedway in 2016 and in 2018 moved up to Legend Cars where he won 20 races across the country and was crowned the INEX Semi-Pro National Points champion.

Since debuting in 2010, Kyle Busch Motorsports (KBM) has quickly established itself as one of the most successful teams in all of NASCAR. Owned by two-time Cup Series champion Kyle Busch and fueled by his passion for winning, the organization holds the Camping World Truck Series records for most career wins (80) and most wins in a single season (14 in 2014). In addition to collecting a series-record seven Owner’s Championships, the organization has produced two championship-winning drivers: Erik Jones (2015) and Christopher Bell (2017).