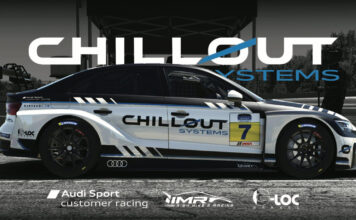 ChillOut Systems joins Irish Mike’s Racing as the primary partner on the TCR spec Audi. Irish Mike’s Racing has a long history of competition through a range of categories, and after some time away from the sport, has established a new shop base in Bunnell, Florida in preparation for growth in 2021.

ChillOut Systems revolutionized cooling systems for racing drivers with the creation of the Quantum Cooler – ChillOut Systems’ first and staple cooling unit. The system utilizes a rotary micro-compressor that circulates Coolant Formula 20 liters per minute at 16 psi on a constant cycle providing an easy and lightweight cooling solution for drivers of any skill level.

The Bunnell-based team will return to competitive racing after a four-year hiatus – last racing in the 2017 Trans Am Presented by Pirelli season with Conor Flynn at the helm. Flynn secured nine podium finishes in two seasons of TA3 and TA5 competition and collected his first win at Michelin Raceway Road Atlanta in 2016. Flynn will return to NOLA with a third place finish in 2016 Trans Am competition in a Porsche 997 GT3 on the 5.37-mile course.

“I’m really looking forward to kicking off our 2021 season with this race at NOLA,” said Flynn, who anticipates a busy racing program in 2021. “We have got everything up and running in the new shop and going up to New Orleans for an enduro weekend like this is a good way to get the season going.”

Todd Buras has been working with Irish Mike’s Racing since 2009 and has been serving as the team’s driver coach, but will switch gears to join the driver lineup for the 16-hours of racing in New Orleans. Buras has a 15-years of sports car experience most recently winning the 2019 SCCA National Championship in a Spec Miata. The veteran is primed to return to the wheel of the green and white ChillOut Systems Audi for his first race back under the Irish Mike’s Racing tent since the then 2014 Continental Tire Sports Car Championship.

“I’m looking forward to getting a lot of seat time this weekend to kick off the year, and I’m happy to be back with Irish Mike’s and have ChillOut Systems onboard with us on the Audi,” said Buras.

The World Racing League Eastern Championship will kick off with testing beginning on Friday, January 29th in preparation for two eight-hour races on Saturday, January 30th and Sunday, January 31st. Live timing of both races from New Orleans Motorsports Park can be found here: https://www.racewrl.com/live-timing.