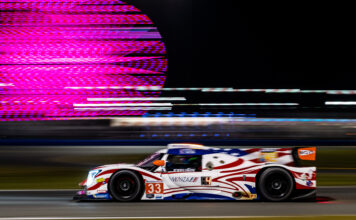 DAYTONA, Fla. (29 January) – Navigating the sheer number of unknowns is the name of the game for Sean Creech Motorsports (SCM) this week, as the team plans to take its No. 33 SCM Exelixis Ligier PS320 to the front of the field in this weekend’s IMSA WeatherTech SportsCar Championship seasons opener, the Rolex 24 At Daytona.

While plenty of challenges await the team as they ready the car to race for 24 hours, one is for certain: one of the stoutest driver quartets in the LMP3 field – four-time Rolex 24 winner João Barbosa, 2020 ELMS LMP3 champion Wayne Boyd, Yann Clairay and Lance Willsey – will be up for the challenge, and they have a very strong roster of support from pit lane.

2021 full-season SCM drivers Barbosa and Willsey paired up for last Sunday’s Motul Pole Award 100, the race for qualifying positions in the Rolex 24. Barbosa put the Ligier into the lead and midway through his stint, had broken away from his competitors by nearly a lap and a half. But with 30 minutes remaining, a loss of fuel pressure ended what might have been a winning run. But the team knows that the pace is there, job one now is to make sure the car can take the fight for 24 hours.

“We need to get the car to be reliable, that’s first and foremost,” said team principal Sean Creech. “The crew work is good, the drivers are good, we just need to keep the car on the track and the rest will fall into place. We had the pace in the race last Sunday, we just need to get it to the finish.”

Few drivers in the field know exactly what it takes to finish the twice-around-the-clock battle at the front better than Barbosa, with four prized Rolex Cosmograph Daytona timepieces in his collection. The Portuguese-born Ormond Beach resident understands the total team effort required to capture victory at Daytona.

“It takes a strong team to win this race – the crew, the drivers, everyone,” said Barbosa. “This is such a team sport, so if one of those pieces doesn’t work, you won’t get a result in a 24-hour race. The team has done a really good job and obviously they’re working to correct the issues we had last Sunday. Mechanical issues are always the last thing you want to have happen in this race, so we’ll work hard to avoid that. I’m glad it happened last weekend and not this one!”

Willsey took the green flag in last Sunday’s race, and the urologic oncology physician, who has competed in 11 previous Rolex 24 events, acknowledges the sheer number of unknowns as they prepare for the endurance classic.

“The best thing about the Roar was coming away with the knowledge that we were close to where we need to be to run up front,” said Willsey. “It’s going to be a fascinating race, first of all to see the LMP3 cars go for 24 hours, then add in the challenge of racing hard but not being too hard on the car. We don’t really know what to anticipate in regard to the potential pit falls, so it will be a fine line between pushing hard and taking care of the car to be there in the end. The crew has worked tirelessly to get this car prepped and I am blessed to share the car with three of the best drivers in the paddock, so now, it’s just about the uncertainty. As always, the only fear right now is fear of the unknown.”

Boyd, from Northern Ireland, won three of five races to capture the 2020 European Le Mans Series championship in the LMP3 class, and he appreciates the opportunity to make his 24-hour race debut in the prestigious event.

“I’m really happy to be here, it’s a great opportunity for me,” said Boyd. “This will be my first 24-hour race and it’s one of the most famous races in the world, so that’s a good place to start! I’m going to spend the next few days looking at video and honestly, trying to chill out a bit and rest. I’ve spoken to a lot of drivers who have experience in 24-hour races, to see what I need to be doing now, so I’ll make sure I’m ready! We had some issues at the Roar but our pace was strong, so
hopefully we’ll get everything resolved and be ready to go.”

Frenchman Clairay has both experience in the LMP3 car (winning an IMSA Prototype Challenge race in 2018 with a Creech-led ESM) and in 24-hour races and emphasizes the need to take care of the car above all else.

“The most important aspect of this weekend will be managing the car over the entire 24 hours,” said Clairay. “We have a lot of experience with the car, so this week is about checking everything, especially after the issues we had on Sunday. It’s a long way to ask the car to go, so we’ll closely monitor the car throughout the race. And it’s the same for the drivers, we’ve been preparing for the past month. The track is not that difficult for the drivers, so the key is to have confidence in
the car, try to keep a clean line so you can either overtake or avoid incidents ahead of you. But I’m ready for this, and I really appreciate the chance to be here. It’s a great opportunity.”

Note: the LMP3 teams are required by IMSA to make an eight-minute pit stop within the first 22 hours to change brakes.

The 59th Rolex 24 at Daytona takes the green flag at 3:40 p.m. Saturday live on NBC. The race will be broadcast in the U.S. between the NBC and NBCSN networks (check local listings) while international viewers can watch via IMSA.tv. IMSA Radio will also be available at IMSA.com.