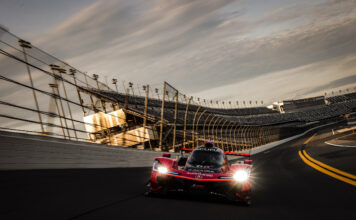 DAYTONA BEACH, FL (29 January 2021) – It is good to work with winners. Justice Brothers factory team Wayne Taylor Racing will be going for their third-consecutive overall victory in the Rolex 24 At Daytona this weekend as the team is set for a big move to the Acura DPi platform in 2021.

The team will be going for its third-straight triumph, with Indianapolis 500 winners Helio Castroneves and Alexander Rossi joining sports car aces Ricky Taylor and Filipe Albuquerque in the No. 10 Konica Minolta Acura ARX-05.

Justice Brothers helped Shank to back-to-back IMSA GT Daytona crowns in 2019 and 2020, and has continued to sponsor car owner Mike Shank as he moves his team up to sports car racing’s highest level.

Brothers Ed, Gus and Zeke Justice founded the Justice Brothers Race Car Repair and Fabrication shop in California in 1946. Two years later, they relocated to Jacksonville, Florida, becoming a major distributor of another oil additive companies products. The family returned to California in 1956, and began developing its own brand of quality automotive products, 2 years later.

Racing played a major role for the family even before they went into business. The Justice family has been involved in some professional capacity with the Indianapolis 500 for 75 years. A major breakthrough came in 1950, when the Brothers sponsored Johnnie Parsons’ winning car at Indianapolis. The move to Florida had come before the formative years of NASCAR, with the Justice Brothers also sponsoring Johnny Mantz at Darlington the same year in the inaugural Southern 500 – NASCAR’s first 500-mile race.

The season-opening IMSA event is set to be yet another chapter in the Justice Brothers history at Daytona, having began providing NASCAR with its first professional uniforms and first multi-car contingency sponsor in the formative years of the sport.

Given its long history in Indy car, midget, drag racing and stock cars, the family is not new to sports car racing. The brothers were present at the first sports car races in Florida. Recently, Ed Justice Jr. sponsored the winning GTD Park Place Porsche in the 2015 Petit Le Mans. Nine years ago, the Justice Brothers sponsored Wayne Taylor’s Corvette prototype and then the winning Cadillac DPi-V.R. Though this partnership they have shared in multiple races wins, 2 championships and 3 Rolex 24 overall wins with a host of legendary drivers.

The Justice Brothers have also partnered with JDC-Miller Motorsports, having won the PC Class with the team in 2016 as well as Performance Tech, who claimed PC honors in the 24 in 2017.

Ed’s daughters Courtney and Caitlin, the third generation of the Justice family, are involved in the business daily. Courtney has been involved with the Rolex 24 program and also active behind the scenes in the paddock.

This weekend, the Justice Brothers will be looking to continue its proud three-quarters of a century legacy when it returns to Daytona International Speedway, seeking its fourth overall victory in five years.