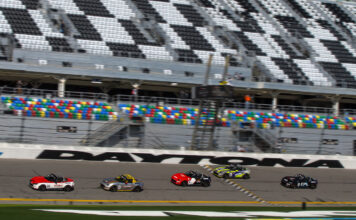 DAYTONA BEACH, Fla. (January 29, 2020) – Team communication was key for Michael Carter’s Mazda MX-5 Cup presented by BFGoodrich® Tires victory at Daytona International Speedway on Friday. A well-timed pass with a full-course yellow on the horizon secured Carter the win in the second race of the double-header season opener.

Carter, the reigning Mazda MX-5 Cup Champion, was part of a three-car lead pack that made its escape from the field 15 minutes into the 45-minute race. The No. 08 Carter Racing Enterprises MX-5 wasn’t leading the pack, however. Carter was in second for almost the entire race, content in the draft behind Gresham Wagner.

With under five minutes left in the race, the No. 13 McCumbee McAleer Racing entry driven by Jenson Altzman made contact with the barriers at the exit of Turn Two. A full-course yellow was needed to remove the car from the course.

Carter’s spotter saw the crash and immediately knew there was no possibility of the race staying green and the cleanup would take more than the four minutes left on the clock. He radioed Carter with the info, and Carter made his move on Wagner into the Bus Stop. Seconds later, the yellow flags were out.

“I have been racing Gresham (Wagner) for two years now so I know how he likes to lead so I just pushed him to run his race,” Carter said. “Jared (Thomas) was able to get into third. I was the buffer car yesterday, today, Jared acted as that buffer. We, meaning Gresham, Jared and I, we were just clicking off laps and we were able to get a little bit of separation and gapped ourselves pretty seriously.

“My spotter let me know there was going to be a full-course caution and since I second-guessed my spotter yesterday when the green flag was called, I listened to him and I went! Jared had no idea, Gresham had no idea. I was the only one who knew.”

It was the right choice, because the race did finish under yellow, and Carter secured his first win of the 2021 MX-5 Cup season.

“Sure enough, as I was braking for the Bus Stop the yellow came out and there’s only about four minutes left and that’s how it ended,” Carter said. “Coming from where we were yesterday, almost wrecking, to winning today here at Daytona is pretty awesome, very special. It’s a decent way to kick off the season.”

Last season’s Rookie of the Year, Jared Thomas, finished one better than Thursday’s race by following Carter across the line in second.

“I saw Michael (Carter) go and I knew it wasn’t really time to start making moves, but I think he’d got the word over the radio that there was a car off,” said Thomas. “I didn’t know yet, but I went and ended up getting second out of it. I was sitting right where I wanted to be in third coming into the race and for the second day in-a-row I got caught out by a caution, but we did what we wanted to do here this weekend, getting two podiums. It’s a good way to start off a successful year.”

Wagner (No. 5 Spark Performance) was unable to repeat his dramatic last lap win from the day prior, but still took the final step on the podium.

“It’s been an exciting weekend all the way through both races,” Wagner said. “Being up front with a little bit more of my usual pace is how I like to get out there. It’s good when you have people like Michael Carter behind just working with you because we were able to break away and make it a three-car race. As soon as I saw us get separated and in line, I knew it was going to come down to something toward the end. That caution wasn’t what I think anyone necessarily wanted, but I’m still happy with how it turned out with a first and a third place finish this weekend. It was a great race all around for Michael out there today and we put together a good weekend and moving on to the next race with points.”

With the incredible door-to-door racing happening through the entire field it was tough to make a pass stick. Hernan Palermo (No. 20 Slipstream Performance) made it look easy though, moving from 20th on the starting grid to 14th at the finish. The feat earned him the Hard Charger Award, which comes with a $1,000 prize for Palermo and another $1,000 for his crew chief.

“It all depends on the people around you and if they are willing to work with you, because you need someone to draft with around here,” Palermo said. “I lost the pack in front of me though, so I couldn’t make up that difference. Daytona is a fun track and this is my first time here.”

Selin Rollan (No. 87 Hixon Motor Sports) and Sam Paley (No. 20 McCumbee McAleer Racing) were initially mixing it up with the top three, but then began to fade back. In the late stages of the race, the two tried to work together to catch the leaders but ran out of time. Rollan finished fourth, followed by Paley in fifth.

A recap of Rounds One and Two at Daytona International Speedway will air on NBCSN, Wednesday, February 10, at 4:00pm ET.

Rounds Three and Four of the Mazda MX-5 Cup are set to take place at the Grand Prix of St. Petersburg, April 23 – 25. Those races will be carried live on IMSA.com and TrackPass on NBC Sports Gold.