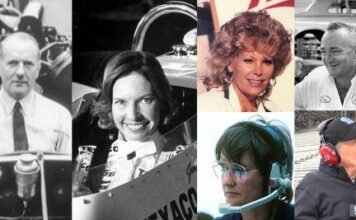 DAYTONA BEACH, Fla. (January 30, 2021) — Nine legends from the world of motorsports, including an unprecedented three female honorees, were named to the Motorsports Hall of Fame of America (MSHFA) as the 33rd class was unveiled on Saturday at Daytona International Speedway in advance of the Rolex 24 At Daytona.

“The Class of 2021 is history-making in so many respects,” said MSHFA President George Levy. “Janet Guthrie, Fran Muncey and Judy Stropus comprise the first ever class with three female inductees. Fran joins inaugural class inductee Bill Muncey as the only husband and wife inductees. And Davey Allison, Bobby Allison and Donnie Allison join Bobby Unser, Al Unser and Al Unser Jr. as the only families with three individually inducted members.”

The MSHFA Class of 2021 was unveiled in an on-line press conference at DIS featuring Levy, new-class representative Stropus, 2005 inductee Hurley Haywood and Daytona International Speedway President Chip Wile.
Each of the MSHFA’s inductees is elected by a straight vote of 200 motorsports experts — half of them inductees themselves. Regular voters include Hall of Famers Mario Andretti, Tom D’Eath, Chip Ganassi, Don Garlits, Parnelli Jones, Scott Parker, Richard Petty, Don Prudhomme and other titans of the sport.

Each year, the MSHFA classes are formally inducted in a celebration featuring motorsports legends and fellow Hall of Fame members at a black-tie gala. Plans for the 2020 induction ceremony, postponed last year at the onset of the COVID-19 pandemic, and the Class of 2021 celebration will be announced in the near future.

Including the 2020 and 2021 classes, 269 “Heroes of Horsepower” are in the MSHFA. The induction of Guthrie, Muncey and Stropus increases to 10 the number of women enshrined in the Hall.

The Motorsports Hall of Fame of America Class of 2021:

Davey Allison (Stock Cars) — Named one of NASCAR’s 50 Greatest Drivers, the eldest son of Hall of Famer Bobby was on his way to becoming one of its all-time greats when his life was cut short at 32 by a helicopter accident. Allison joined his father as a Daytona 500 winner in 1992 and would finish with 19 wins. His career winning percentage put him well ahead of several Hall of Famers and just behind superstars like Dale Earnhardt and Darrell Waltrip. The 1987 NASCAR Rookie of the Year topped the series in races led (23) in 1991 and laps led (1,377) the following year. Allison won a career-best five races both seasons.

John Cobb (Historic) — Englishman John Rhodes Cobb earned prominence in the U.S. by setting the Land Speed Record on the Bonneville Salt Flats. In 1939, he drove his piston-engine, wheel-driven Railton Special to a new world mark of 369.70 MPH. In 1947, Cobb upped his own record to 394.2 MPH in a completely redesigned Railton Mobil Special. Cobb’s record lasted longer than any other LSR for the flying mile, finally surpassed by Craig Breedlove (MSHFA Class of 1993) in his jet-powered Spirit of America (407.45 MPH) in 1963 and the Summer Brothers’ piston-engine, wheel-driven Goldenrod (409.277 MPH) in 1965.
Larry Dixon Jr. (Drag Racing) — The three-time NHRA Full Throttle Top Fuel champion (2002, 2003, 2010) has the second highest Top Fuel win total in the sport’s history behind Tony Schumacher and ahead of MSHFA inductees Joe Amato, Kenny Bernstein and Don Garlits. Dixon won his first NHRA national event in just his second start and went on to become 1995 NHRA Rookie of the Year. In addition to his 62 wins, Dixon was top qualifier 51 times, had 46 low ETs and 33 top speed passes. He was also the first Top Fuel driver to record a sub-4.5-second pass. His 2010 title included 12 wins and a perfect 12-0 in final rounds.

Janet Guthrie (Open Wheel) — The first woman to compete in the Indy 500 and Daytona 500, she paved the way for other women at the top levels of the sport, including Lyn St. James, Sarah Fisher and Danica Patrick. She was also the first woman to earn Top 10 starting positions and finishes in both the IndyCar and NASCAR Cup Series. She was the first woman to lead a Cup race (Ontario, 1977), and is tied with Patrick for highest Cup finish (6th). Guthrie’s driving suit and helmet are in the Smithsonian Institution.

Nicky Hayden (Motorcycles) — “The Kentucky Kid” is best known for winning the 2006 MotoGP World Championship, breaking Valentino Rossi’s streak of five straight titles. Hayden emerged in 1997, winning the inaugural AMA Horizon Award in recognition of his flat-track prowess. In 1999 he was named AMA Athlete of the Year after capturing the AMA Supersport title and his first Grand National win. Three years later he became the youngest ever winner of the AMA Superbike Championship, including the 2002 Daytona 200. He was killed bicycling in 2017. That year, the AMA renamed the Horizon Award in his honor.

Robin Miller (Media) — For many he’s the ultimate voice of IndyCar racing, having covered the sport for over half a century. In 1968, age 18, he became a writer for the Indianapolis Star, where over the next 33 years he became one of the nation’s most influential motorsports journalists. Miller has provided IndyCar expertise for ESPN and the Speed Channel. He is currently in his 10th year as an analyst for NBC’s IndyCar coverage and seventh year as a featured correspondent for RACER magazine and RACER.com, including his popular column Miller’s Mailbag.

Fran Muncey (Powerboats) — Before her husband, 1989 Inductee Bill Muncey, perished in a 1981 racing accident in Acapulco, he asked Fran, should anything happen to him, to continue the race team. She not only fulfilled his wish but carried on with astonishing success. Over the next seven years she amassed one of the greatest records as a team owner in the sport’s history. From 1981-88, Fran Muncey led Bill Muncey Enterprises to 24 wins and a record seven straight Gold Cups, in the process successfully transitioning the organization from piston-powered to turbine boats.

Judy Stropus (Sports Cars) — Best known for her savant-like ability to score and time even 24-hour races singlehandedly, without a break before the dawn of computerized timing, Stropus was sought out by top teams such as Penske, Bud Moore Racing, BMW, Al Holbert and Brumos Racing. Perhaps the ultimate recognition of her talent was that sanctioning bodies would come to her to correct glitches in their own scoring. A sports car racer herself, she won the 2008 AARWBA Jim Chapman Award for Excellence in Public Relations. In 2015, the Road Racing Drivers Club bestowed on Stropus its coveted Bob Akin Award.

The MSHFA is housed in the Speedway’s Ticket and Tours Building located in front of the famed 2.5-mile DIS tri-oval. Access to the MSFHA is included with every Daytona International Speedway tour, which run throughout each day, or as a museum-only ticket. The attraction is open daily nearly year-round except holidays and on major DIS race and event days.

About the Motorsports Hall of Fame of America: The MSHFA is the only hall that honors all American motorsports: cars, motorcycles, airplanes, off road and powerboats. Its mission is to celebrate and instill the American motorsports values of leadership, creativity, originality, teamwork and spirit of competition. Founded by Larry G. Ciancio and Ronald A. Watson, it held its first induction in 1989. Watson spent the next 30 years tirelessly building it into the nation’s premier such hall of fame until his passing in 2019. The original museum in Novi, Mich., relocated to Daytona Beach, Fla., in 2016 and greets more than 100,000 guests a year. MSHFA is operated by the nonprofit Motorsports Museum and Hall of Fame of America Foundation, Inc.