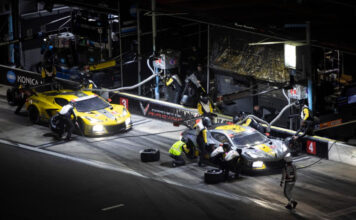 DAYTONA BEACH, Fla. (January 31, 2021) – Corvette Racing found itself locked in a fierce five-car GT Le Mans (GTLM) battle and continued to run 1-2 in the category as the Rolex 24 At Daytona entered the final six hours.

Nick Tandy held a five-second lead in the No. 4 Mobil 1/SiriusXM Chevrolet Corvette C8.R that he took over from teammate Tommy Milner inside seven hours to go. Milner, Tandy and Alexander Sims combined to lead 407 of the 574 laps at the 18-hour mark of the IMSA WeatherTech SportsCar Championship’s biggest race.

Their biggest challengers so far have been No. 3 Mobil 1/SiriusXM Corvette teammates Jordan Taylor – who ran second behind Tandy – Antonio Garcia, and Nicky Catsburg, who have combined to lead 133 laps heading into the final six hours. The result is far from over as the top four GTLM cars were within 14 seconds of each other entering the final stretch run.

A victory this afternoon would be Corvette Racing’s fourth at the Rolex 24 and first since 2016.

TOMMY MILNER, NO. 4 MOBIL 1/SiriusXM CHEVROLET CORVETTE C8.R: “It’s really tough out there, and it’s not going to be easy to the end. You can tell BMW and the Ferrari are coming fast. I expect a pretty close fight all the way to the end.”
INTER-TEAM BATTLE: “No question that just as good as our Corvette has been, they (the No. 3 C8.R) has the same package that we do. They are certainly quick and we’ve been basically nose to tail in one form or another for the entire race. That will be a big fight at the end, there’s no question about that. As we saw in 2016, the team is OK with some racing at the end. With an hour or two to go, they’ll let the guys race a little bit than we have been. At the moment, the pace of the two cars seems to be almost dead-on. There hasn’t been a point in the race where I’ve had to maintain by them or the 3 car has to maintain behind us. It’s been really good racing. It’s easy in these situations when you have guys that are so close to you all the time to keep your focus. It’s been a 24-hour race that has gone by pretty quickly.”

MORE ON THE 2016 FINISH: “It’s looking that way right now, for sure. There is still quite a ways to go so there’s a lot that can still happen. There’s a lot going on the track and a lot that can go wrong on the track, through traffic, on pitlane, with some car gremlins. It looks like the 25 is having some issues. We’re definitely not counting our chickens. We have a long way to go to get to 3:40. It would be fun if we could have two Corvettes up front at the end racing hard. It wouldn’t surprise me if there was a red or black car up there, too.”

ANY FURTHER SHIFTING PROBLEMS: “We haven’t had the same problem as at the start of the race where I lost drive for a moment. It’s just a function of us knowing what to do if it does get to that point. It is a concern for us, but it seems like for the last 10 hours or so that the three of us have been able to manage the problem a little bit. It doesn’t really hurt us on pace and laptime. If the problem does occur, then it costs us some time but we all know what to do quickly to get the car back in gear. As long as it stays like it is, I don’t think it will be any problem for us. But in a 24-hour race, you’re always concerned about these little issues that could potentially get worse. We’re all that we can as drivers to minimize the problem area. Let’s see what happens.”

PACE OF BMW IN THE FINAL HOURS: “It’s definitely in the back of my mind. On one of the restarts recently, they certainly had quite a bit of horsepower and were able to drive right past me. We’ll see how it goes. It seems like our long-run pace is a little bit better than the BMWs and possibly the Ferrari as well. I think they’re both a little quicker at the beginning of the stint. It’d be nice if it would go green all the way to the end because I think that would benefit us. But I’d be very surprised if there weren’t a couple more cautions.”

JORDAN TAYLOR, NO. 3 MOBIL 1/SiriusXM CHEVROLET CORVETTE C8.R: “We had some hard racing last year between the Corvettes. Mid-Ohio was one in particular that I remember well. This is the staple and style of racing that we see from Corvette Racing, like 2016 when Oliver (Gavin) and Antonio (Garcia) battled over the last hour nose to tail just like this. I think it’s going to come down to the wire again. It’s nice to see Corvettes battling 1-2 but everyone else is still fast. It will be tough to the end.
“Last year was an amazing race for Corvette Racing as a whole coming out with the C8.R in its first year and being so dominant. It was great to win the championship but coming in 2021, it’s like a full reset for the team. Last year was great but now it’s all starting again, and everyone wants to win a Rolex. A win last year would have been a tough order in the car’s debut race. We came back strong and won here in July. We won six races but they were all sprint races. We definitely want to get one on the endurance side.”