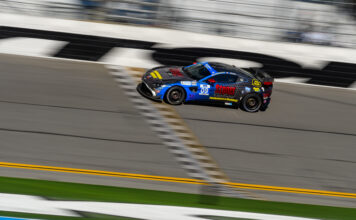 DAYTONA, Fla. (29 January 2021) – It was a tale of what might have been for the Stoner Car Care Racing fielded by Automatic Racing team in Friday’s IMSA Michelin Pilot Challenge season opener. After starting deep in the large field, the No. 09 Stoner Car Care Aston Martin Vantage GT4 made significant forward progress early in the race, only to be hit from behind midway through the BMW Endurance Challenge at Daytona.

Like its WeatherTech SportsCar Championship brethren, the Michelin Pilot Challenge series began 2021 with one of the longest races of the season, the four-hour event that acts as the lead-in for Saturday’s 59th Rolex 24 At Daytona.

The driver trio of Rob Ecklin Jr. (Lancaster, Pa.), Ramin Abdolvahabi (Palm Beach Gardens, Fla.) and Brandon Kidd (Syracuse, NY) began the weekend with a solid setup after last weekend’s Roar Before the Rolex 24 test. Ecklin garnered the most track time in the practice sessions after missing the Roar due to business conflicts. Qualifying the car on Thursday in 17th position, Ecklin took the green flag determined to find the speed that he felt had eluded him the day before.

And find it he did, working his way around slower traffic and battling with other cars in the Grand Sport class in the early going until a yellow flag prompted the team to make a quick decision: bring Ecklin in for a splash of fuel and rear tires 25-minutes into the race, and hope that a corresponding yellow late in his stint would help them stay near the front.

The strategy worked to perfection as Ecklin took advantage of pit stop and his fresher Michelin tires to carve his way through the field into the eighth position during his 75-minute stint before handing the Aston Martin over to Abdolvahabi with two hours and 42-minutes remaining.

“There was a lot of track time and a lot of traffic time as well,” said Ecklin. “The first part of that stint was really about trying to get around some guys, and I was able to get a few. After we came in early on, I was able to manage the car really well through that stint, the rear tires were really great – I was coming off of Turn Six and out of the Bus Stop just like lightning. But as the stint went on the tires were really losing grip in Turns Three and Five. I just kept trying to work the draft and find the spots to move forward. I didn’t run as fast as I would have liked to, but I was battling traffic. With some new tires and some clean air, we should be able to see some better times. With everything going on out there the car did well.”

But disaster befell the team as the race continued. Coming back from a yellow, Abdolvahabi was tagged from behind on the back stretch and spun around in Turn Six, falling from eighth place all the way to P21. He fought back to P18 before handing the wheel to Kidd with one hour and 43-minutes remaining.

“I felt bad for the driver who hit me, actually,” said Abdolvahabi. “We talked after the stint – he knew he wasn’t going to be able to pass me, so he backed off and he got hit hard from behind, and his car hit ours. The damage wasn’t bad, the car was a little shaky, but the whole field passed us because we were just coming off the restart. Then the penalty put us a lap down. It was just bad luck; we know we are fast.”

Unfortunately, Kidd endured his share of misfortune as well. During his second pit stop IMSA officials believed he had run over his fuel hose and received a stop-and-go penalty. The team disputed the penalty, but to no avail, and the No. 09 entry went a lap down.

Kidd was pleased with the balance of the Aston Martin but was mired in the TCR field as he returned to the fray. Making his way out of the slower car field, he showed pace in the Aston Martin, setting the car’s quick time of the weekend (1:55.287 on Lap 87.) When the checkered flag flew, he had settled into 18th position, ruing what might have been.

“The car had speed and it felt good, I was just hoping that we could get that lap back,” said Kidd. “But when you get caught up in a mess early on, that’s what happens. The penalty was a tough one, that was just bad luck. The car was really hooked up, I wish I could have had a chance to really show what it could do.”

“A tough day,” said Automatic Racing team manager David Russell. “Especially the incident in Turn Six. That was really frustrating. IMSA said we ran over the fuel hose but none of us saw that, but the penalty on top of the incident put us too far down. But we’re building on the positive aspects: the team did some great pit stops, great tire changes, driver changes. The crew in the shop gave us a great car, it never missed a beat – and that’s something to build on.”

Next up for the Stoner Car Care Racing Team is the Alan Jay Automotive Network 120 weekend at Sebring International Raceway, March 17 to 19.