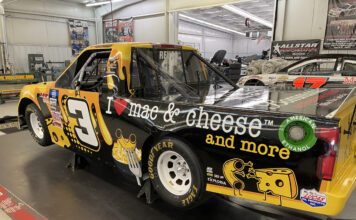 Bobby will make his initial NCWTS start Feb. 19 at the Daytona (Fla.) International Speedway Road Course in the BrakeBest Brake Pads 159 with support from the restaurant chain I Heart Mac & Cheese and More, along with JAR team partners Bommarito Automotive Group and Lucas Oil. Roger will make his first start for the 2021 season at a later date.

I Heart Mac & Cheese and More is a fast-casual concept restaurant specializing in made-to-order, build your own bowls and grilled cheese sandwiches that guests can customize using a wide variety of chef-inspired proteins, ingredients and sauces. Current locations are found in the states of Florida, Georgia, New York and Texas.

“This will be my best effort at a NASCAR road course since I started competing in NASCAR as a driver five years ago.” stated Reuse. “With Jordan finishing second in last Friday’s nights NextEra 250 it gives us a fantastic starting position. The truck that JAR and Bruce Cook have put together for me provides a recipe to give the team a great opportunity to have a really strong finish. With all of the experience I have on the Daytona Road Course in SCCA GTA and GT1 competition, I’m confident we will have a great showing to welcome our new partner I Heart Mac & Cheese and More – to the sport of NASCAR. It has been exciting to watch the progression of Jordan’s team over the years, and we are incredibly proud to be a part of it.”

The Reuse Brothers are no strangers to competing on the road courses of NASCAR as they both have starts with JAR in 2018 and 2019 in the NCWTS as well as four starts a piece in the NASCAR Xfinity Series (NXS) with other teams.

“We are all proud to welcome Bobby and Roger Reuse back to our team this year for their collective effort to a partial schedule in the No. 3 truck.” Said team owner Jordan Anderson. “It has been quite the journey growing this team from its roots to where it is now – and Bobby and Roger have both been incredible supporters of the vision from Day 1. I know they both will do a great job working alongside the team and crew chief Bruce Cook as we push to provide competitive Chevrolet Silverado trucks for our drivers to run.”

After the completion of the BrakeBest Brake Pads 159, Bobby Reuse will compete in an additional three NCWTS events throughout the 2021 season, while Roger will compete in four events.

Additional partners for the Reuse Brothers NCWTS effort will be announced at a later date.

About I Heart Mac & Cheese and More