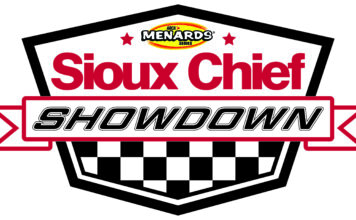 2021 Showdown Set to Kick Off May 22 at Toledo Speedway

The new Sioux Chief Showdown logo represents a modernized look, updated from the original “Short Track Challenge” logo that carried over prior to 2020, when the Showdown was formed upon inclusion of the ARCA Menards Series East and West into the overall ARCA Menards Series platform.

“The new logo symbolizes an evolution and extension of the original series,” stated Joe Ismert, President of Sioux Chief Manufacturing. “The partnership with ARCA, Menards, and NASCAR has been tremendous. Last year the series went coast to coast and allowed ARCA Menards East, West, and Premier series drivers and teams to compete at 10 select races as the series became the Sioux Chief Showdown. We are proud to likewise unveil a new logo for the series.”

The Sioux Chief Showdown is a 10-race championship designed to allow drivers not eligible to run the entire ARCA Menards Series the chance to race for a championship. Showdown events are held at oval tracks one mile in length or shorter and road courses. Drivers must be 18 or older to run at most tracks larger than one mile, while drivers as young as 15 can compete on oval tracks one mile in length and under and road courses. Sioux Chief’s involvement within the ARCA Menards Series has been almost exclusively tied to the series’ short track events. In 2015 and 2016, Sioux Chief served as the event entitlement sponsor for ARCA’s annual visit to Lucas Oil Raceway in suburban Indianapolis, as well as supporting ARCA TV broadcasts.

In 2017, Sioux Chief made a significant increase in support to the series, taking over the naming rights for what was then named the Sioux Chief Short Track Challenge, followed by another significant increase in support in 2020 when teams participating in the Showdown races competed for nearly $1 million in race purses, point fund awards, and bonus programs.

Sioux Chief first partnered with ARCA and series sponsor Menards in 2015. The business-to-business relationship between Menards, the country’s third-largest home improvement retail chain, and Sioux Chief, a leading rough plumbing manufacturer and supplier of cutting-edge products for plumbing and mechanical contractors, brings opportunities for Sioux Chief to promote its products to the Menards contractor and customer base.

“Sioux Chief is an important partner to both Menards and ARCA,” commented Jeff Abbott, Menards Spokesperson and Promotions Manager. “Sioux Chief is a great vendor supplier for our contractors, and a terrific sponsor within the ARCA Menards Series.”

Sioux Chief is a Buy American Compliant company which manufactures more than 90% of the products it sells. Sioux Chief designs, builds, and maintains its own machines, tools and dies, and equipment, including copper tube forming tools and machines, plastic injection molds, packaging, and testing equipment.[1]