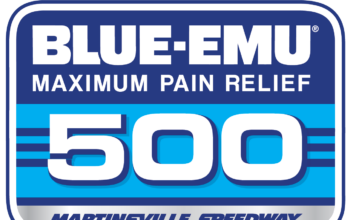 The NASCAR Cup Series will go under the lights Saturday night at the famed .526-mile Martinsville (Va.) Speedway.

Michael McDowell will bring the No. 38 Fr8 Auctions Ford Mustang to the track Saturday looking to expand on his career-best season. The Daytona 500 Champion is coming off a 12th-place finish before Easter at the Bristol Motor Speedway and has three top-10 finishes in the first seven races.

The success of McDowell and the No. 34 Front Row Motorsports (FRM) team is in no small part to the duo of McDowell and crew chief Drew Blickensderfer. Together, they have one win, three top-five and nine top-10 finishes since pairing in 2019. The results have been the best for the No. 34 FRM team.

McDowell talks about his success with Blickensderfer:

“I had seen what Drew had done in the past and I felt like he had a lot of key assets that help make a team better. And in NASCAR, it’s all about people. The better people you have, the more success you are going to have, too. So, I knew I wanted to work with Drew.

“Drew helped bring a few people with him to FRM in 2019, our first season together, and I could feel things were different or going to be different. That gives you a lot of confidence when you come to the track, too. In 2019, we were really good on the superspeedways, but we were always pretty good there. I think last season, we really saw a big difference because our cars, setups, performance and finishes were better at all tracks. We were preparing great cars at the shop and coming to the track with speed. The confidence between Drew and I, it just grew all season, and we felt like we could get better in 2021.

“This season, seven races into it, we’re taking what we’ve learned from 2019 and last season and putting it all together. Our road crew has pretty much stayed the same, too. That really helps when you have a group that has success together, to stay together. We’ve had one or two small changes with engineering staff and our pit crew has changed, but we’ve been trying to keep everyone together. That’s another thing Drew has been really good at. He can keep this team pointed in the best direction. We’ve seen how it’s all coming together and we just need to continue to push forward.

“And, of course, through it all, you need a good partner. We have that with Fr8 Auctions. They also came over with me in 2019 and have grown with us. We gave them a top-10 at Daytona at the Road Course as a primary partner earlier this year. We want to do that again for them this weekend at Martinsville.”