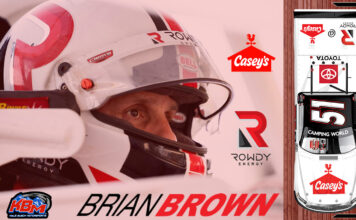 Brown boasts an impressive resume racing Sprint Cars, currently totaling 185 career victories at the numerous tracks he has competed at across the country. The 42-year-old Missouri native has recorded 52 career wins and four track championships at Knoxville in the 410 Sprint Car division, (2010, 2017, 2019-2020) and another 16 victories and one title in the 360 division (2002). ‘Blackjack’ finished second three consecutive years (2012-2014) in the prestigious Knoxville Nationals, a yearly event held at the half-mile dirt oval.

“It’s so cool that I’m getting the opportunity to make my NASCAR Camping World Trucks Series debut at a track that is not only my favorite but a track that I’ve experienced a tremendous amount of success, with my long-time partner Casey’s, and my newest partner Rowdy Energy collaborating to make this dream come true,” Brown said. “It’s been a lot of fun this year as a Rowdy Energy athlete to be able to introduce racing fans across the country to all of the great flavors that Kyle has created in his energy drink and interact with them when they share their appreciation for his product on social media. I’m excited that now they’ll be able to purchase Rowdy Energy easily at over 1800 Casey’s stores.”

“Brian has been a great ambassador for the Rowdy Energy brand this year and has an impressive resume at Knoxville, so as the Camping World Truck Series visits the famed dirt track for the first time, we thought it was the perfect opportunity to get him behind the wheel of the No. 51 Tundra,” Busch said. “From racing out in Iowa a few times myself, I’ve seen firsthand how much Casey’s supports motorsports in the Midwest. It’s an honor to not only have them onboard at KBM as a sponsor for the inaugural NASCAR event at Knoxville but to also have them carrying Rowdy Energy in their stores.”

KBM has earned three of its Camping World Truck series-leading 83 career wins on dirt tracks. Darrell Wallace Jr. won at Eldora Speedway in Rossburg, Ohio, a half-mile dirt oval, in 2014 and Christopher Bell made it back-to-back victories for the organization at the famed track in 2015. Most recently, 2017 NASCAR Cup Series champion Martin Truex Jr. drove the No. 51 Toyota to victory March 29 in the Truck Series inaugural dirt race at Bristol (Tenn.) Motor Speedway.

Casey’s General Stores is a Fortune 500 company (NASDAQ: CASY) operating over 2,200 convenience stores in 16 states. Founded more than 50 years ago, the company has grown to become the fourth-largest convenience store retailer and the fifth-largest pizza chain in the United States. Casey’s provides freshly prepared foods, quality fuel and friendly service at every location. Guests can enjoy pizza, donuts, other assorted bakery items, and a wide selection of beverages and snacks. Learn more and order online at www.caseys.com, or in the mobile app.

With a focus on wellness for longevity in his career and life, Kyle Busch, the accomplished driver aptly nicknamed “Rowdy” for his will to win at all costs, created Rowdy Energy with a proprietary Enhanced Energy Formula. Comprised of precise time-released caffeine, sugar reduction ingredients, amazing taste and hydration levels above leading sports drinks, Rowdy Energy is a “better for you” product. Specifically formulated for your needs to accomplish any challenge thrown your way and to be your most effective self. Rowdy Energy seeks to support those that embody a spirit of high performance, not just all-star athletes but the weekend warrior, superhero mom, the ambitious college student, the men and women in uniform.

Rowdy Energy is currently available in seven flavors, including five sugar free options that are KETO certified. For our more traditional energy drink consumers, we designed a 60% less sugar option than the other leading energy drink brands.

Since debuting in 2010, Kyle Busch Motorsports (KBM) has quickly established itself as one of the most successful teams in all of NASCAR. Owned by two-time Cup Series champion Kyle Busch and fueled by his passion for winning, the organization holds the Camping World Truck Series records for most career wins (83) and most wins in a single season (14 in 2014). In addition to collecting a series-record seven Owner’s Championships, the organization has produced two championship-winning drivers: Erik Jones (2015) and Christopher Bell (2017).