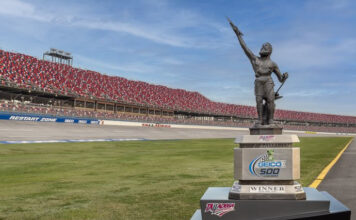 130-pound Work of Art, along with the Hammer & Anvil Trophy, now a Tradition

TALLADEGA, Ala. (April 20, 2021) – It stands more than 38 inches tall, weighs over 130 pounds, and is called the Vulcan Trophy. Talladega Superspeedway’s tradition (that started in fall of 2016) is a locally made piece and will be found in Victory Lane after the checkered flag falls on Sunday’s GEICO 500 NASCAR Cup Series race (1 p.m. CDT, FOX, MRN Radio and SiriusXM NASCAR Radio).

The trophy is a hand-made, miniature version of the colossal Vulcan statue – a 56-foot tall structure fastened to a 124-foot platform that stands tall over the city of Birmingham, Alabama – just 45 minutes west of the race track. It is the largest cast-iron statue in the world and is the main attraction at Birmingham’s Vulcan Park Museum (www.visitvulcan.com).

Vulcan, which pays homage to the god of fire in Ancient Roman myth, has overlooked Alabama’s largest city from atop Red Mountain since the 1930s. Birmingham, founded in 1871, is unique because it contains coal, iron ore and limestone, the raw materials for making iron and steel. Three items are unique to Vulcan, who made weapons and armor for all the gods.

His hammer and anvil that he used in his forge (shop where metal is heated and hammered into useful items) and the spear, which is a piece of his completed work that he held high and admired. For the winners of Saturday’s doubleheader – the General Tire 200 for the ARCA Menards Series and the Ag-Pro 300 for the NASCAR Xfinity Series, they will receive the smaller Hammer & Anvil Trophy.

Each trophy is handcrafted by local artists from Sloss Furnaces in Birmingham, pouring hot iron into a created cast, then chiseled to perfection.

Team Penske driver Joey Logano was the inaugural recipient of the Vulcan Trophy after his triumph in the fall of 2016. “I was pumped to be the first driver to win one,” Logano said. “Trophies are one of the best parts of what we do, and some of them are just cooler and more special because of what they are. Talladega Superspeedway nailed it when they had the Vulcan Trophy made.”

To create the Vulcan Trophy, sculptors start with an original wax pattern, and after it is created, a rubber mold is designed and then molded in sand. Hot, melted iron is then poured into the mold. After complete cooling, the iron pieces are removed from the sand mold. The last step is the finishing area. There, the statue is heated with torches to remove moisture from the iron. Finally, a wax finish is applied to the Vulcan, which cools down the piece before more wax and a clear coat is applied prior to it receiving a final brush up.

While the Vulcan and Birmingham are forever linked together, Talladega Superspeedway also has a longer history with the two dating back decades. In 1969, one month after the running of the first NASCAR Cup Series race at the 2.66-mile mammoth speedway, the ARCA series took the track in the Vulcan 500, and Jim Vandiver took the checkered flag. A year later, Ramo Stott was victorious in the Vulcan 500.

Now, more than 51 years later, the connection between TSS and Vulcan continues with the Vulcan Trophy. This incredible piece of history awaits the winner of the GEICO 500 at the biggest and baddest track on the planet, amid the cheers of adoring fans and under the watchful eye of the iconic Vulcan Trophy.

Here’s the “Tale of the Tape” for the Vulcan Trophy:

Limited admission options remain for the GEICO 500 and fans are encouraged to log onto www.talladegasuperspeedway.com or call 1-877-Go2-DEGA for details. Tickets are available for Saturday’s doubleheader, with kids 12 and younger admitted free (with a paying adult) to grandstands/towers.