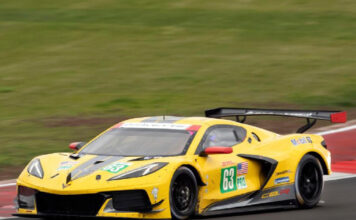 DETROIT (April 22, 2021) – Corvette Racing takes its first steps toward a return to the 24 Hours of Le Mans next week with the opening round of the FIA World Endurance Championship at historic Spa-Francorchamps. Antonio Garcia and Oliver Gavin are set to team in a unique opportunity for sports car racing’s dominant GT program at the Six Hours of Spa on Saturday, May 1.

For the first time, Garcia and Gavin will team together for Corvette Racing with the pair sharing the No. 63 Mobil 1/SiriusXM Chevrolet Corvette C8.R. This will mark the first appearance for the mid-engine racing Corvette outside the United States and the team’s first appearance at Spa.

The Garcia/Gavin pairing and the rest of the Corvette Racing contingent will take part in two days of FIA WEC preseason testing Monday and Tuesday before official practices get under way Thursday at the 20-turn, 4.35-mile circuit in the heart of the eastern Belgium.

Between them, Gavin and Garcia have 318 starts, 73 wins and nine championships with Corvette Racing, but they’ve never shared the same racecar within the program. Each, however, has previous experience in GT programs at Spa.

Garcia was part of a class-winning effort at the 2001 Spa 24 Hours and won there in European Touring Car competition as well. Gavin has raced both open-wheel and sports cars including a podium finish in the 2016 Spa 24 Hours.

The run by the No. 63 Corvette in the GTE Pro category will help lay the groundwork as the program makes its comeback to Le Mans in August after missing last year’s event due to the COVID-19 pandemic. The program has won eight times at the event since 2001 and will enter two Corvette C8.Rs in this year’s race.

Competing at Spa will provide the Corvette Racing team a bit of a refresher on specific rules and strategy methods that are unique to FIA WEC races. Pit stop operations and safety car procedures are among the biggest differences in IMSA WeatherTech SportsCar Championship and FIA WEC competitions.

Live race television and online coverage will be available via MotorTrend Network and MotorTrend On-Demand. Radio coverage for all practice sessions plus Friday qualifying and the race will air on Radio Le Mans. Live timing and scoring will be available on the FIA WEC website.
ANTONIO GARCIA, NO. 63 MOBIL 1/SiriusXM CHEVROLET CORVETTE C8.R: “It’s a nice idea to run this race at Spa to prepare for Le Mans. It’s not just as drivers but the engineers and the crew… everyone will be up to speed on the WEC philosophy of racing. With all the rules and differences from IMSA, it’s a good warmup for Le Mans. It helps everyone clear their minds and be focused on being prepared. That’s the main thing.
“I’ve been in the Spa 24 Hours twice, and I just missed the podium my last time. I’m really looking forward to racing the Corvette at Spa. A proper racetrack deserves a proper car like the C8.R! I’m looking forward to going around there in a GTE car. I really enjoyed my time racing in a GT1 car several years ago, and I’m sure the Corvette will be even more pleasant this time around.”

OLIVER GAVIN, NO. 63 MOBIL 1/SiriusXM CHEVROLET CORVETTE C8.R: “When I was first spoken to about this opportunity to race at Spa, I had gone back to Antonio and he had asked if there was any chance that we could drive together. I’m really thrilled. We’ve become really great friends over the years. I’d been teammates with nearly everyone else but had never been teammates with Antonio! It’s just a really great thing to share the C8.R with him. It’s going to be special. We’ll want to push as hard as we can for as strong a result as possible.
“Spa is one of the greatest tracks where anyone could go race. It has a very good cadence to it. It certainly has some of the most challenging corners anywhere in the world – whether you’re talking about Eau Rouge, Blanchimont or any of the stuff coming back down the hill. It’s all challenging and a great track to race on. It’s a track that I think will suit the C8.R. You also think about the weather at Spa and what could happen. Late April into the beginning of May can throw up any sort of condition at you. It’ll be phenomenal to go there with the team and with such a great racecar. It’ll certainly make all the hair stand up on the back of my neck as I’m driving down the pitlane for the first time and taking it all in. It’s going to be a very special weekend. I’ve had some great success there over the years but also some frustrating and disappointing moments. But you always go away feeling exhilarated. You never ever leave Spa thinking it was just OK or that you didn’t get much of an experience. It’s a thrill to drive around, and the challenge is immense.”