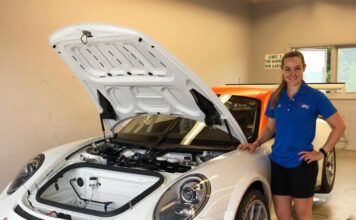 AUSTIN, Texas (April 22, 2021) – Sabré Cook will join TPC Racing for the Porsche Sprint Challenge North America by Yokohama doubleheader next weekend, April 30 – May 2, at Circuit of the Americas in Austin, Texas.

Cook will be part of a three-car effort for TPC Racing, joining season-long drivers Pedro Torres and Rob Lorndale in the TPC Racing paddock. Cook will race the 991.2-generation No. 37 TPC Racing Porsche 911 GT3 Cup in the championship’s Platinum Cup class.

“We’re really excited to have a young driver of Sabré’s quality with us at TPC Racing for this event,” Harris Levitas, Director of Race Operations, said. “Sabré brings a lot of talent behind the wheel, but also a lot of experience in multiple championships around the world and a strong engineering background. It should be a really great weekend for the entire TPC Racing team.”

The 26-year-old driver and engineer joins TPC Racing in the Porsche, but is also scheduled to visit COTA in October as a W Series driver during the Formula One weekend. Cook drove the Porsche 911 GT3 Cup at the SCCA Super Tour at Virginia International Raceway just two weeks ago to a pair of third place finishes, despite being underpowered relative to the rest of the GT-1 class.

“I’m thoroughly excited to compete in my first Porsche Sprint Challenge race,” Cook said. “The fact it’s at the beautiful COTA track makes it even better. I know the competition is high and I’ll have a lot to learn still with running these cars but I’m going to give it my absolute best and enjoy the opportunity. Massive thanks to Apple Motorsports and Apple Automotive for making the race happen for me. I’m very much looking forward to running with TPC Racing and pushing for a good performance.”

Cook, Torres and Lorndale return to action with two 25-minute practices on Friday, April 30, qualifying on Saturday morning, May 1, and the first 40-minute race of the weekend on Saturday afternoon at 5:40 p.m. CDT. Sunday features a second 40-minute race at 10 a.m. CDT.