Round 3 Racing Races to Double Victory at Road America 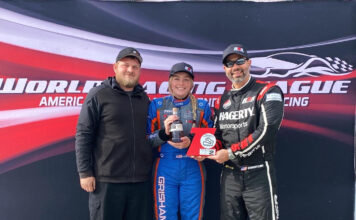 Elkhart Lake, Wisc. (9 May 2021) – Continuing a streak of podium appearances, the Round 3 Racing squad claimed two class victories in the GP2 and GP3 classes in the second race of the weekend at Road America.

The two class wins marks the first time in Round 3 Racing history that they have claimed the top spot in multiple classes in the same race.

Just narrowly missing the top spot in the GP2 class on Saturday with a run to second place, Shea Holbrook, Christian Maloof and Hannah Grisham did one better with a first-place finish.

Holbrook opened the eight-hour race in the No. 601 Team Sentinel Porsche Boxster from seventh, quickly working her way up to second by the lap six when the first full-course caution appeared. Holbrook held her position in the lead GP2 pack for 55 laps before coming to pit lane for a driver change. Maloof took over the controls of the Boxster for his first stint of the day.

Close racing on the final lap of Maloof’s stint resulted in contact damaging and puncturing the rear right tire. Luckily the timing of the incident worked in the team’s favor as the No. 601 came to pit lane for a new tire, fuel and a driver change. Grisham returned to the course still in podium contention.

Running a double stint, Grisham stretched the lead of the No. 601 to five laps ahead of second place before handing the car back over to Maloof for the closing laps. Maloof brought the No. 601 Team Sentinel Porsche Boxster across the finish line in first to claim the first win of the 2021 WRL season for the No. 601 entry.

“Getting a win today in the No. 601 Team Sentinel Porsche Boxster is an amazing feeling,” said Grisham. “The Round 3 Racing crew gave us a reliable and fast car and that was critical to our result today. Only being a part of this lineup for a few races, it is such valuable experience working with Christian (Maloof), Shea (Holbrook) and the rest of the R3R lineup. I am excited that we got the win today and I know we are capable of continuing this success.”

Like it’s sister car, the No. 605 Hagerty Drivers Club Porsche Boxster of Cole Loftsgard, Dennis Neel, Jim Ptak, and Carter Pease claimed a victory in the GP3 class – their first win of the season.

Setting the fastest lap in Race One placed the No. 605 on the class pole for Sunday’s race. Loftsgard locked in at the start of the eight-hour race settling in for a double stint. Soaring through traffic and leaving the GP3 field behind, he quickly placed a one lap gap to the rest of the field.

Like clockwork, Ptak, Neel and Pease continued to stretch the No. 605’s lead to six laps. Pease brought the Porsche Boxster to the checkered flag in first claiming the GP3 class victory.

“I knew when I got in the car I knew we had a significant lead and I focused on making smart racing decisions,” said Pease. “The win today is my first win in a sports car. I wouldn’t want this moment to be with anyone else but Round 3 Racing. They all are supportive and great people to work with and the environment is unlike any other. Daytona is just a few weeks away and I am already looking forward to being back in the No. 605 Hagerty Drivers Club Porsche Boxster.”

A new race day looked up for Loni Unser, Mike Gilbert and Mo Dadkhah as the No. 701 Porsche started 11th in the GP1 field with Dadkhah behind the wheel for the race start. Late braking and quick straight line speed aided Dadkhah as he weaved his way up the running order to second by Lap 10.

Luck for the No. 701 quickly ran out as Gilbert and Unser both reported tire lock up during their stints – a result of the continuing brake gremlins. Those brake issues then forced the No. 701 back to the garages for repairs at the halfway mark.

The team went to work, and while out of podium contention, they utilized the remainder of the race to test the car with team owner Brad McCall suiting up to finish the remaining 1.5-hours on the way to an eighth place finish.

Although starting the final eight-hour race just off the GTO class pole in second, Sarah Montgomery did not stay there long as she took over the overall lead before the first turn on the opening lap. Settling into race pace, the No. 702 slotted into third where Montgomery clicked away laps.

On Lap 49, misfortune struck the No. 702 when an exhaust issue forced the Porsche to pitlane for repairs. Quick work by the R3R crew got the car back on-track. Montgomery drove 25 more laps before handing the car over to Brad McCall.

During the second hour of McCall’s stint, trouble struck again as the rear left shock broke while in the kink – the fastest portion of the 4.048-mile course. Again the R3R crew executed repairs efficiently allowing the No. 702 to continue, although 27 laps down.

McCall finished out his four-hour stint coming to pitlane for a driver change to his father, Buz McCall, who finished the day in the No. 702 Team Hagerty Porsche Cayman bringing it home in ninth.

Round 3 Racing returns to WRL action at Daytona International Speedway on June 4-5th – the fifth round of the 2021 season for a single 14-hour endurance race.