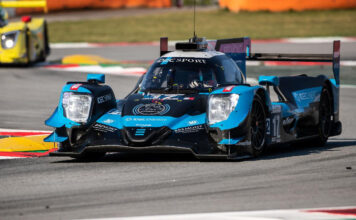 INDIANAPOLIS, Ind., (April 10, 2021) – While the DPi, LMP3, and GTD classes of the IMSA WeatherTech SportsCar Championship head to Mid-Ohio SportsCar Course for the third race of the 2021 season, LMP2 team Era Motorsport will spend their “off” weekend in Spielberg, Austria for the next round of the European Le Mans Series, the 4 Hours of Red Bull Ring.

The Indianapolis, Indiana-based sports car racing team joined the European Le Mans Series with IDEC Sport Racing last month, after winning the Rolex 24 At Daytona in January, and the Asian Le Mans Series championship in February. The team, with drivers Kyle Tilley, Dwight Merriman, and Ryan Dalziel earned a fourth-place finish at their debut at the 4 Hours of Barcelona in April.

“We’re hoping to improve upon our fourth-place finish at Barcelona,” said Team Owner and driver Kyle Tilley. “The current weather forecast for Austria suits us in that we had a great test last week and made some big dry weather gains with the car. It’s also a new track for us, so it’s going to be a bit of a learning curve, but we’re confident heading into the event!”

Spielberg’s Red Bull Ring will be a new track for all three drivers, boasting 10 turns in 2.683 miles. The team recently completed a test at Watkins Glen International in preparation for the event, as well as June and July’s back-to-back IMSA WeatherTech races.

“Our Watkins Glen test was very productive,” said driver Dwight Merriman. “We were able to get plenty of track time and really dial in the various setup changes that will help us throughout the season. I’m looking forward to learning another new track, in the ELMS. This series has been a great learning experience and I’m really enjoying the atmosphere and competition.”

A total of 41 cars will compete in the 4 Hours of Red Bull Ring, with the LPM2 class holding 16 entries, including the No. 17 IDEC Sport Oreca 07 with Tilley, Dalziel, and Merriman. The group will compete in the new Pro/Am category within the LMP2 class, in a group of seven cars.

“We learned a lot in Spain that we can take forward to Austria,” said Dalziel. “ELMS is so different to IMSA that it was for sure an eye-opening experience with some very challenging weather, so we are hoping for a smoother and calmer Red Bull Ring race. We had a really good test back in the USA at Watkins Glen recently and I think we learned a few things that will help ourselves and IDEC for Austria. It’s another new track for all three of the Era drivers, so we’re looking forward to another new challenge.”

The first practice will take place on Friday, May 14, followed by additional practice and qualifying on Saturday. The 4 Hours of Red Bull ring will begin on Sunday, May 16 at 11:00AM CEST, and will air live on the ELMS YouTube channel, accompanied by comprehensive coverage from Radio Le Mans.

About Era Motorsport
Era Motorsport was formed in 2018 with the idea of providing unmatched excellence in historic racing. Just two years later, the team expanded to the world of professional sport car racing, fielding an Oreca 07 in the prolific IMSA WeatherTech SportsCar Championship and the 24 Hours of Le Mans. In 2021, the team went on to win at the iconic Rolex 24 At Daytona, in what was their second attempt competing in the event. Motorsport isn’t just a hobby, it is a way of life: a passion that is in the team’s blood. Whether you find us in the IMSA WeatherTech paddock with modern prototypes or chasing down lap records in our fully restored classic sports cars, or even globetrotting to experience historic F1 at some of the world’s most iconic circuits, Era Motorsport has something for everyone. In 2021, the team will return to the IMSA WeatherTech SportsCar Championship for the full LMP2 season and also contest in the full seasons of the Asian Le Mans championship and European Le Mans Series.