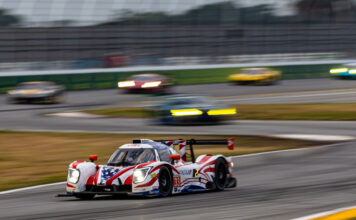 With two endurance races in the books, SCM prepares for the first IMSA sprint race of the season

JUPITER, Fla. (10 May 2021) – With two of the toughest endurance races on the schedule in its rear-view mirror, Sean Creech Motorsport (SCM) gets ready to tackle the first sprint race of the 2021 IMSA WeatherTech SportsCar Championship season, the Acura Sports Car Challenge at the Mid-Ohio Sports Car Course (Sunday, NBCSN, 2:30 p.m. Eastern).

With the change of format, SCM wanted to arrive as prepared as possible. Drivers João Barbosa and Lance Willsey tested their No. 33 SCM Exelixis Ligier JS P320 at the twisty and challenging 13-turn, 2.258-mile road course late last month and continued the learning process on their LMP3-class entry. At two hours and 40 minutes, the race might appear to be less of a challenge than the series’ recent 12 and 24-hour events, but both drivers say that’s far from reality.

“We made good progress on handling and setups at the test, which is even more important given the low-grip surface at Mid-Ohio,” said Barbosa, a four-time Rolex 24 at Daytona winner. “Everything happens very quickly there and there’s no room for mistakes, so we’ll focus on having a clean and safe race.”

“People talk about how difficult Sebring is, but I find Mid-Ohio to be a much more physically demanding circuit because you’re always busy,” said Willsey, who will handle double duty this weekend, also driving the No. 24 SCM Ligier in the IMSA Prototype Challenge race, alongside Francesco Melandri. “You’re either exiting a corner or setting up for the next and with four classes on track, there’s a lot of moving parts out there. Pit stops also become a huge part of the strategy, to figure out drive time distribution in such a short amount of time and to execute well. All we can do is control the controllable.

“I go into every race feeling as though I have zero margin for error – though of course, by virtue of the time frame involved, a small mistake can be overcome in a 12 or 24-hour race,” Willsey continued. “But this weekend, given the crowded racetrack and the relatively short race, the opportunity to recover from a mistake is nearly nonexistent. The low-grip surface makes it difficult to race off-line so traffic will definitely be an issue.”

The team has two solid finishes to its credit to start the season – a second place at the Rolex 24 at Daytona and a fifth at the Mobil 1 Twelve Hours of Sebring, though the result at Sebring did not reflect the caliber of the team’s performance. Team principal Sean Creech has a 30-plus year history in sports car racing, though this is the team’s first season in the WeatherTech series, and in years of racing at Mid-Ohio, Creech knows that staying on top of the rapidly changing racetrack will be key.

“We tried almost everything at the test,” said Creech. “Some things worked, some things didn’t, but that’s the whole point of a test. Yes, we’ve had 36 hours of racing so far this season, but racing doesn’t give you the opportunity to work on a myriad of setup possibilities. A test gives you the time to stop and make changes and you learn as much from what didn’t work as what did. The race weekends have minimal practice time so hopefully we’re narrowed in on where we need to be, we’ll just tune into the track conditions each day. We’ve raced there for many years and we’ve seen every kind of weather possible.”

The team is making its first-ever campaign in IMSA, but from the top of the pit box to the driver seat, the entire team has decades of experience to bring to bear as SCM looks to build momentum through the season.

“We continue to learn more and more about the car itself, how to manage the car,” said Willsey. “Daytona was good, we just had too much downforce so we were down on straight-line speed. Sebring was frustrating because the team gave us a very good car, one of the best I’ve driven, but any luck we had was bad luck. We’re ready to move on now, and I’m looking forward to getting back to work with João. I think it’s fair to say that there is no driver in the LMP3 field that has his breadth of experience. We’re blessed to have him on board: his feedback on the car is always spot-on to get the most out of the car. He’s been instrumental in our success to date.”

The Acura Sports Car Challenge takes the green flag Sunday at 2:40 p.m. Eastern. The race will be broadcast live in the U.S. on NBCSN, while international viewers can watch via IMSA.tv. IMSA Radio will also be available at IMSA.com.

About SCM
Team leader Sean Creech has competed in a multitude of sports car series from 1990 until the present day, including Group C, IMSA GTP, WTSCC, Grand-Am, SRO World Challenge, and IMSA. SCM moves to the WeatherTech Series in 2021 with João Barbosa and Lance Willsey.