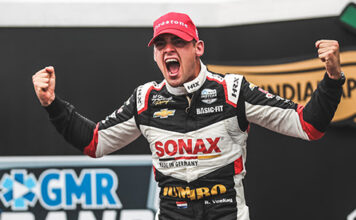 INDIANAPOLIS (Saturday, May 15, 2021) – The belief always has been there for Rinus VeeKay. Now it has translated into victory.

VeeKay earned his first career NTT INDYCAR SERIES victory Saturday in the GMR Grand Prix on the Indianapolis Motor Speedway road course in his 19th career start. VeeKay drove his No. 21 Sonax/Autogeek Chevrolet to a 4.9510-second victory over NTT P1 Award winner Romain Grosjean in the No. 51 NURTEC ODT Honda.

Alex Palou rounded out the podium finishers in the No. 10 The American Legion Honda.

“I actually thought it, yeah,” the confident VeeKay said when asked if he believed he could win this 85-lap race. “We had an awesome start to the weekend. I knew we had the car; we were so fast. I’m so happy for the team, so thankful. I couldn’t have done it without them.

“A perfect day. It’s amazing, and thank you to all the fans coming out. Getting my first podium here last year and now winning, it’s a dream.”

VeeKay, 20, became the sixth-youngest winner in INDYCAR SERIES history by delivering Ed Carpenter Racing its first victory since Josef Newgarden won in July 2016 at Iowa Speedway. VeeKay also became the first driver ever to win in the NTT INDYCAR SERIES and in all three rungs of the Road to Indy ladder series – Indy Lights, Indy Pro 2000 and USF2000.

The victory also continued a remarkable opening five races of the 2021 season, with three first-time series winners – VeeKay, Palou (Barber Motorsports Park) and Pato O’Ward (Texas 2) – for the first time since 2013. There also has been a different winner in each race this season.

2020 NTT INDYCAR SERIES Rookie of the Year VeeKay led 33 laps and averaged 116.096 mph. He took the lead for good on Lap 65 when six-time series champion Scott Dixon made his final pit stop in the No. 9 PNC Bank Chip Ganassi Racing Honda, on a different pit strategy than the leaders.

Then VeeKay managed his gap over Grosjean and traffic over the closing 20 laps as very light rain began to spatter the Speedway. The moisture never required a switch to rain tires, but it kept VeeKay and the rest of the 25-driver field atop their respective steering wheels.

VeeKay’s margin over Grosjean was 9.0106 seconds with 10 laps to go. Grosjean, helped by Firestone alternate “red” tires that were three laps fresher than VeeKay’s, sliced that gap nearly in half over the last 10 trips around the 14-turn, 2.439-mile circuit but never threatened VeeKay, who also slowed in his final laps to save enough fuel to finish.

“I was not concerned about the fuel,” VeeKay said. “I just hoped the rain was not going to get worse. I’m standing in Victory Lane!”

This was the first podium finish in open-wheel racing since 2015 at Spa-Francorchamps, Belgium, with Lotus in Formula One for rookie Grosjean, who joined Dale Coyne Racing with RWR this year after 10 seasons in F1.

“That’s really a good day,” Grosjean said. “I think we’ve done really good work this weekend. We learned at the start of the race, and we were super fast. We were a bit unlucky with the slower cars and traffic, but P2 in my third INDYCAR race is not too bad.”

Fans at IMS serenaded Grosjean with cheers as he was interviewed on pit lane after the race. The Frenchman has gained worldwide acclaim and popularity for his positive attitude after suffering severe burns to his hands last November in a fiery crash at Bahrain that ended his F1 career.

“It’s incredible,” Grosjean said of the crowd. “Bahrain, it was horrible, but for my life it’s been a great experience, and people really are behind me, and I can tell. I can feel it. The support I’m having is incredible. You only see me smiling here in the U.S.”

VeeKay and Grosjean both used the Firestone primary “black” tires for only one stint, but their strategies differed. VeeKay started on primaries from the seventh starting position, while Grosjean led the field to the green flag on alternates from the pole.

That choice allowed Grosjean to rocket to a lead of more than four seconds over Palou before both made their first stops on Lap 25.

Grosjean, who led a race-high 44 laps, regained the lead on Lap 28 after the field cycled through its stops. He made his second stop on Lap 43 and switched to the more durable but less grippy primary tires, handing the lead to Ryan Hunter-Reay, on a different pit strategy in the No. 28 DHL Honda.

VeeKay had made his second stop on Lap 36, with a set of alternate tires. He used the extra grip to pass Grosjean for third in Turn 12 on Lap 44. But it was a decisive move because Hunter-Reay and Dixon were running 1-2, respectively, but on a different pit strategy.

Two-time series champion Newgarden finished fourth in the No. 2 Snap-on Tools Team Penske Chevrolet, while Graham Rahal rounded out the top five in the No. 15 Fifth Third Bank Honda.

The next NTT INDYCAR SERIES race is the 105th Indianapolis 500 presented by Gainbridge on Sunday, May 30. Practice on the 2.5-mile oval opens Tuesday, May 18.

Results Saturday of the GMR Grand Prix NTT INDYCAR SERIES event on the 2.439-mile Indianapolis Motor Speedway road course, with order of finish, starting position in parentheses, driver, chassis-engine, laps completed and reason out (if any):