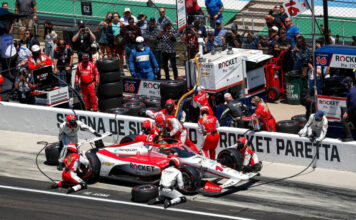 INDIANAPOLIS (May 30, 2021)—For the first time in the 105-year history of the Indianapolis 500, a team comprised primarily of women has competed in the world’s largest sporting event. It was a dream brought to reality by long-time motorsport executive and team principal Beth Paretta who launched Paretta Autosport just four months ago with the idea of creating a more inclusive space for women in motorsports.

Veteran INDYCAR driver Simona De Silvestro made her sixth trip to the famed Brickyard behind the wheel of the No. 16 Paretta Autosport/Rocket Pro TPO Chevy, completing 170 of 200 laps before brake trouble on pit entry ended the day for the team.

L to R: Simona De Silvestro, Will Power and Sage Karam at driver introductions
With 135,000 fans in attendance for the first time since the beginning of the pandemic, all eyes were on the Paretta Autosport pit crew as four women—Madison Conrad, Caitlyn Brown, Amanda Frayer, and Mallorie Muller went “over the wall,” a first for INDYCAR, while aero engineer Lauren Sullivan and junior data acquisition engineer Chelsea Pechenino monitored data and on track performance from the pit box. Sara Durant was the team’s tire specialist and Formula W racer Ayla Agren was the Turn 3 spotter. Additionally, all of Paretta’s front office personnel are women, totaling approximately 70% of the team’s staff.

Quotes below:
Simona De Silvestro, Driver, No. 16 Paretta Autosport Rocket Pro TPO entry
“It was really cool to see everyone at the track, so many fans. It was super special. We went out there and I think we were quite speedy, particularly at the end. Kudos to everyone who put so much work into it. Unfortunately, I ran out of brakes a little bit and I couldn’t really save it there at entry. Maybe I could have done something a little different, but it’s pretty disappointing to end the day like this. The whole month everyone did such a great job, and we’re proud of the effort. It was really good to be back in an IndyCar and I hope for more.

“Michael Nelson, Strategist, No. 16 Paretta Autosport Rocket Pro TPO entry
“What a big race today. That’s the most people I’ve been around in a long time, so it was exciting to see that, and go through all the great parts that make this such a big race. It was special to be here for this team and to work with Beth and Simona and all the people in this group. They’ve really come a long way since they all got together months ago, and it shaped up into a pretty good team today. We didn’t have the result we wanted. We were behind the eight ball a little bit from qualifying, but the car was a lot better today and we were able to move forward a bit and make some passes. We just didn’t get the opportunity strategy-wise with the way the race played out to try to work our way up to the front; but the car was good, and Simona did a great job. Everyone on the team did a great job, particularly because there’s a couple of people who’ve never pitted a car before. To be under the pressure they had today in one of the biggest races there is and to perform so well says a lot for the group. The sky is the limit with more experience.”

Beth Paretta, Team Owner/CEO, No. 16 Paretta Autosport Rocket Pro TPO entry
“The No. 16 Paretta Autosport Rocket Pro TPO Chevy was fast today, well balanced. Simona had a great start to the day and just locked them up there at the end. Some other drivers were caught out with the same issue, but this is racing. We had a terrific first outing. The women on the crew did a great job. The pit stops were pretty smooth. We need a little improvement in some places and there’s some work to do on our consistency, but great job overall. I want to thank everyone at Team Penske for the technical alliance. I can’t wait to be back on the track and with this team.”

Additional races are under consideration by Paretta Autosport, but no announcements have been made at this time.

Tickets go on sale next week for Grand Prix of Portland