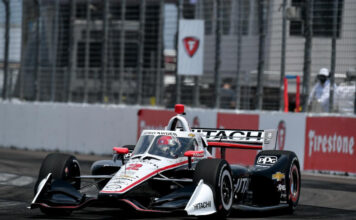 DETROIT (June 9, 2021) – With the challenges of the 2.5-mile Indianapolis Motor Speedway oval in their rear-view mirror, Chevrolet drivers turn their attention to a 2.35-mile, 13-turn temporary street circuit for the Chevrolet Detroit Belle Isle Grand Prix presented by Lear.

Eleven entries powered by Chevrolet’s 2.2-liter, twin-turbocharged, direct-injected V6 engine will compete in the 70-lap Duals on Saturday, June 12, and Sunday, June 13. Both races will have same-day qualifications.

Twin races on the bumpy street circuit, which features hard braking zones and short, speedy straights prime for overtaking, present tests of durability for both drivers and their race cars.
“There’s not a weekend that resembles the other,” said four-time INDYCAR champion Sebastien Bourdais, who will drive the No. 14 ROKiT Chevrolet for A.J. Foyt Racing in the doubleheader. “There are some very, very key moments in the weekend that make it a great or good or a bad or terrible one. I think you just have to be open-minded; you have to get a look at optimizing everything. You know if you don’t execute, then it’s not going to be a fun experience.
“We were lucky enough to put two on the board for Chevy back in ’15 and ’16. Yeah, love to do it again. For us it’s kind of another race, but we know it means a lot more if we get it done.”
Chevrolet has won six of the races on scenic Belle Isle since taking over as title sponsor of the event in 2012 – the same year it returned to NTT INDYCAR SERIES manufacturer competition. The event was not held in 2020 because of the COVID-19 pandemic.
In 2019, Josef Newgarden secured his 12th career Series victory in Dual 1 in his Team Penske Chevrolet. Teammate Will Power is a two-time winner, and four-time Indianapolis 500 winner Helio Castroneves completed a Team Chevy sweep with Power in 2014.
Belle Isle has hosted NTT INDYCAR SERIES doubleheader race weekends dating to 2013.
“We got two races, which is fantastic, at one of my favorite tracks. I think it’s a great chance to get points and a great chance to load up the old Chevy Tahoe with trophies and drive it back to Indianapolis,” said Conor Daly, who returns to the No. 20 U.S. Air Force Chevrolet for Ed Carpenter Racing.

NBC will telecast both rounds of the Chevrolet Detroit Grand Prix live at 2 p.m. ET Saturday, June 12, and noon ET Sunday, June 13. The 70-lap races will also be broadcast live on INDYCAR Radio Network affiliates, Sirius 211, XM 205, Indycar.com, and on the INDYCAR Mobile app powered by NTT DATA. Practice and live qualifications will stream on Peacock Premium.
Chevrolet on display at Belle Isle
In addition to action on the racetrack, the Chevrolet Motorsports Display will be full of Chevrolet vehicles that spectators can learn more about throughout the weekend.
Highlights of the Chevrolet Motorsports Display, which opens at 7:30 a.m. each day in the Fan Zone, include:
• A Corvette Racing C8.R show car and the No. 16 Paretta Autsport Chevrolet that Simona De Silvestro drove in the Indianapolis 500 on May 30.
• A Camaro ZL1, Silverado and Blazer Redline edition.
• An opportunity to receive a 2021 Chevrolet Detroit Grand Prix special edition T-shirt.
The 2021 Arctic White mid-engine Chevrolet Corvette Stingray will lead the field to the green flag on both Saturday and Sunday.
Team Chevy will be represented by:
A.J. Foyt Enterprises
Dalton Kellett, No. 4 K-Line Insulators AJ Foyt Racing
Sebastien Bourdais, No. 14 ROKiT AJ Foyt Racing
Arrow McLaren SP
Pato O’Ward, No. 5 Arrow McLaren SP
Felix Rosenqvist, No. 7 Vuse Arrow McLaren SP
Carlin
Max Chilton, No. 59 Gallagher Carlin
Ed Carpenter Racing
Conor Daly, No. 20 U.S. Air Force
Rinus VeeKay, No. 21 Sonax/Autogeek
Team Penske
Josef Newgarden, No. 2 Hitachi Team Penske
Scott McLaughlin, No. 3 PPG Team Penske
Will Power, No. 12 Verizon 5G Team Penske
Simon Pagenaud, No. 22 Menards Team Penske
Chevrolet IndyCar V6 Year-By-Year Results since 2012