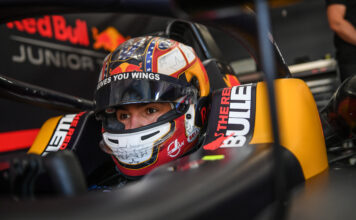 This will be the second appearance for the 16-year-old Texan in Formula 3, with the Red Bull Junior driver competing for Hitech Grand Prix. Crawford made his F3 debut in May at Circuit de Catalunya in Barcelona, Spain, where a qualifying strategy miscue came back to haunt him in all three weekend races. He did manage to gain positions in the event, finishing 13th, ninth and 18th.

The following weekend, Crawford ran his first full program in the Euroformula Open at Paul Ricard, capturing the pole, winning the opening two races, recording the fastest lap in all three races, and finishing second in the finale.

“I gained a lot of experience at that track, for sure,” Crawford said. “Last month was my first time there, so now I know the track and I know the good lines. Getting experience with safety car restarts, along with all the overtaking and defending that happened that weekend, I learned a lot from that weekend and hopefully I can carry some of that over to when I come back for F3.”

Crawford was originally scheduled to run the Euroformula Open race at Spa, but as the FIA works through COVID-related schedule updates for Formula 1, the accompanying F3 schedule change led to a schedule conflict.

“I was looking forward to competing at Spa, before there was a schedule clash,” he said. “I did a test there, and I really enjoyed the track; it is definitely one of my favorites so far.”

Following this weekend, Crawford gets a weekend off before the next F3 event on July 3-4 at the Red Bull Ring in Spielberg, the Austria, the third of seven rounds on the 2021 schedule. The following weekend, he competes in the Euroformula Open at the Hungaroring in Hungary. Both series run three-race weekend formats.