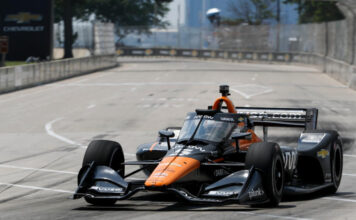 Now, with confidence garnered from two victories in the past five races with a fast Chevrolet-powered race car, the 22-year-old Arrow McLaren SP driver is looking forward to settling some unfinished business this weekend at Road America.

O’Ward recorded his first Series pole on the 4-mile, 14-turn road course, led 43 of the 55 laps and wound up second to current teammate Felix Rosenqvist in the second race. In the opener, O’Ward advanced four positions to finish eighth.

“It’s not easy to compete in INDYCAR. I think we showed we’re contenders,” O’Ward said after the race at the Wisconsin venue.

He has consistently showed the race craft, poise and demeanor not only of a contender for race wins but a title threat through the first half of the season. O’Ward moved to the top of the championship standings with a victory and third-place finish from the pole in the Chevrolet Detroit Grand Prix doubleheader last weekend on the Belle Isle temporary street circuit. His second win of the season also pushed Chevrolet to the top of the Manufacturers’ Championship standings.

“Obviously, there’s been very high and very low moments. But these guys gave me an opportunity, and I told them I will get you your wins and I will get you your results, so I hope my bosses are proud of me” O’Ward said. “I’m very excited to see what we can accomplish in the next years.”

In the short term, securing another solid result in the 55-lap Rev Group Grand Prix presented by AMR on Sunday, June 20, is the goal shared by O’Ward and 10 other Team Chevy drivers.

Team Penske teammates Josef Newgarden and Will Power will seek their second win at the facility since the NTT INDYCAR SERIES returned in 2016 after a seven-year absence. Both won from the pole, and Power has added second-place finishes the past two years.

There are two changes to the Team Chevy lineup for the race weekend due to drivers not being medically cleared by INDYCAR to compete.

Oliver Askew, the 2019 Indy Lights champion, will drive the No. 21 Direct Supply Chevrolet for Ed Carpenter Racing after Rinus VeeKay underwent successful outpatient surgery for a fractured left clavicle sustained Monday, June 14, in a cycling incident. Askew, 24, who made 12 NTT INDYCAR SERIES starts in 2020, most recently filled the seat of the No. 7 Vuse Arrow McLaren SP Chevrolet in the second race at Belle Isle after Felix Rosenqvist crashed in Race 1 and was not cleared to drive.

In Rosenqvist’s place this weekend, Formula One veteran Kevin Magnussen will be behind the wheel of the No. 7 Chevrolet in his NTT INDYCAR SERIES debut. Magnussen, 28, who drove for McLaren in F1, co-drove a Cadillac prototype to an IMSA WeatherTech SportsCar Championship overall victory last weekend in Detroit.