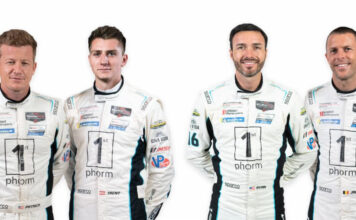 BATAVIA, Ohio. (June 16, 2021) – Heading into the fifth event of the IMSA season, Wright Motorsports has announced changes to the driver lineup of the No. 16 Porsche 911 GT3 R in the WeatherTech SportsCar Championship. Trent Hindman will replace full-season driver Ryan Hardwick to race alongside Patrick Long in the GTD-class championship while Hardwick continues his championship efforts in the Michelin Pilot Challenge with Jan Heylen in the No. 16 Porsche 718 Cayman GT4 Clubsport in the GS class.

Hindman first joined the team’s GTD effort in January’s Rolex 24 At Daytona, where the team earned its second consecutive fourth-place finish at the famed endurance event. He reprised his role for the Twelve Hours of Sebring, racing alongside Patrick Long and Jan Heylen, earning a second-place result. Hardwick returned for the third event of the year, the team’s home race at Mid-Ohio SportsCar Course. The No. 16 Porsche 911 GT3 R was showing an impressive run for a podium finish when contact from another car took the team out of contention. Hindman’s return to the No. 16 1st Phorm Porsche will provide the young American with the opportunity to again vie for the championship, after taking the GTD class title in 2019.

In Michelin Pilot Challenge, the team has made big strides to make up for lost time after missing the first race of the season, securing two pole positions and two second-place finishes in its two races. In Hardwick’s first Michelin Pilot Challenge race at Mid-Ohio SportsCar Course, he secured the pole position, finishing second with co-driver Jan Heylen in the No. 16 1st Phorm Porsche 718 Cayman GT4 Clubsport. With the strong momentum fully in stride, the pair are working their way up to the points leaders to contend for the 2021 championship.

The new changes will take effect beginning with next week’s race events, the Sahlen’s Six Hours of the Glen and the Tioga Downs Casino Resort 240 at the Glen and continue to the remainder of the season. Details for the upcoming races will follow in the team’s event release next week.