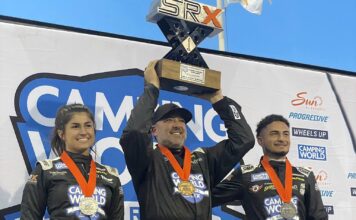 For the first time in his driving career, Tony Stewart brought home the checkered flag Saturday night at Knoxville Speedway after drawing pole position. The Indiana native had to fend off battles from Hailie Deegan, Michael Waltrip, and Ernie Francis Jr. to earn his first win at Knoxville.

“It’s the first time I’ve ever been in victory lane at Knoxville as a driver, are you kidding me?” Stewart said to CBS Sports. “This is where I watched Donny Schatz and Steve Kinser, the greatest of the greats in Sprint Car racing. I’ve never seen one coming backwards like this, but this is a place I always wanted to be for sure. So this is pretty cool.”

After making some rule changes earlier in the week, SRX Racing Series officials reduced the main feature from 75 laps to 50 laps and cut the heat races from 15 minutes to 12 minutes.

Stewart grabbed the checkers early on winning the first heat race but the field was inverted for the second heat race. In the second heat race, dirt late model racer stand out, Scott Bloomquist, scored the victory with Eddie Francis Jr., Michael Waltrip, Tony Stewart and Hailie Deegan rounding out the top five.

After the two heat races were completed, next up was the 50-lap main feature. Stewart was on the pole based on a random draw.

Four cautions occurred early in the main event due to multiple incidents. The first yellow was for debris with 46 to go and then the next two yellows were brought out by the “Local All-Star” Brian Brown. Brown caused two yellows as his machine spun around twice. During the first incident, he spun by himself while the second spin was caused by contact with Willy T. Ribbs.

The final yellow of the night flew with Ribbs spinning on the backstretch and bouncing off of Helio Castroneves.

Following the yellow, Scott Bloomquist was poised to pull away from the field with his dirt experience. Unfortunately, he slid up the track and lost several positions, ultimately falling back to eighth. It was during that moment that Stewart took the lead.

Shortly thereafter, Waltrip led with 39 laps to go and held on to the lead for 10 laps before Stewart resumed the top position with 29 to go. As Stewart was setting the pace, the field was slowed once again for a caution with 18 to go as Bloomquist was spun in Turn 4 by Castroneves.

Despite the late-race yellow and multiple challenges from Waltrip and Deegan, Stewart held on to win his first-ever Knoxville dirt race and his first SRX victory. Hailie Deegan, Ernie Francis Jr., Helio Castroneves and Michael Waltrip rounded out the top five.

Deegan, who competed in her first SRX race, came home second to Stewart as she replaced Tony Kanaan in what was called “The Replacement” car.

“My goal coming into this race was to prove to everyone that I deserved to be here. I feel like we did that tonight, running second to Tony Stewart, that’s a huge accomplishment for me,” said Deegan, a three-time winner in the NASCAR K&N Pro Series West – one of which came on dirt Feb. 28, 2019 at the Las Vegas Motor Speedway Dirt Track. “I feel like we just ran a clean race, we just wrapped the bottom, stayed consistent, ran my line and finished second.”

Meanwhile, Ernie Francis Jr, a winner in the Trans-Am Series rounded out the podium finish with a third.

“Not too bad for my second-ever dirt race,” Francis said. “We were just kind of riding around there trying to save the tires as much as I could. The car wasn’t as good in the feature as it was in the heat races, so I was just trying to keep the back end underneath me and just try to save it as much as I could, try to keep my position and I really had an awesome battle with Hailie out there. I was trying to get to the back of Tony’s bumper to try and get by him, but you can’t be happier than this. It was an awesome race. The car’s a little beat up, but I can’t wait to get to the next one.”

Up Next: The Camping World SRX Racing Series continues its summer stretch by heading to Eldora Speedway next Saturday night. It will be broadcast live on CBS.