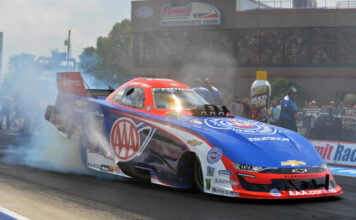 DETROIT (July 14, 2021) – National Hot Rod Association’s (NHRA) teams use the three-race Western Swing during the midsection of the regular season as a gauge of how they stack up in their respective categories entering the stretch run to the seven-race Countdown to the Championship.

“It’s where you want to really want things to start coming together,” said Robert Hight, driver of the Auto Club of Southern California Chevrolet Camaro SS Funny Car.
Hight and teammate John Force, driver of the PEAK/BlueDEF Platinum Camaro SS, enter the first leg of the Western Swing at Bandimere Speedway in Morrison, Colorado, with the momentum of advancing to the final round in five of the seven Funny Car events – winning three times.

“The air is a little different so there’s adjustments to be made but Denver sets the tone for the next two races, whether it’s riding the momentum or motivation to get after it,” added Hight, a four-time winner and three-time No. 1 Funny Car qualifier at the strip southwest of Denver.

This year, the Western Swing also includes stops at scenic Sonoma Raceway in northern California and Auto Club Raceway in Pomona, California. All three events were not held in 2020 because of the COVID-19 pandemic.

Denver is not part of the Pro Stock schedule this year. Drivers of the Chevrolet Camaro SS will catch up with the nitro divisions at Sonoma Raceway on July 23-25. Greg Anderson sits atop the standings with reigning champion Erica Enders in second. Both have two wins.

John Force is the only Funny Car driver to sweep the Western Swing (1994) and won the first two legs in 2016 before falling in the first round of eliminations at Seattle. John Force Racing has a swing sweep to its credit in 2016 when Hight won in Denver, Courtney Force prevailed in Sonoma and John Force wrapped up the victory in Seattle.

Force, who recorded victory No. 152 and 153 of his illustrious career earlier this season, is second in the Funny Car standings. Hight is fourth.

“It’s been a good season. This PEAK Chevy has been running really well. Daniel Hood and Tim Fabrisi, they have a handle on it,” said Force, who has an NHRA-record eight wins at the racetrack. “I just have to get out there and do my job, and that’s not easy with all these young guys out there running against me. I’ve got to work hard to keep up with them. It’s working so far.”

Brittany Force also heads to the mountains with momentum. The Monster Energy/Flav-R-Pac team raced to their second runner-up finish of the season and set the track Top Fuel elapsed time record at the most recent event in Norwalk, Ohio, in the Chevrolet dragster. She is fourth in the driver standings.

David Barton and Aaron Stanfield, who have won Constant Aviation Factory Stock Showdown races this season in their Chevrolet COPO Camaros, highlight the field this weekend in the fourth race of the eight-event series.

CHEVROLET FROM THE COCKPIT
TOP FUEL
BRITTANY FORCE, JOHN FORCE RACING, MONSTER ENERGY/FLAV-R-PAC CHEVROLET DRAGSTER (No. 1 qualifier in Las Vegas and Charlotte four-wide events; runner-up in Charlotte and Norwalk; semifinalist at last race at track): “After a couple weeks off our Monster Energy / Flav-R-Pac team is ready to get back to it. We head to the mountain for the Mile-High Nationals in Denver and coming off a runner-up finish in Ohio, we feel confident going into this next one and getting the Western Swing started. Our car has been running consistent and our team is ready for a win.”

FUNNY CAR:
JOHN FORCE, JOHN FORCE RACING, PEAK/BLUEDEF PLATINUM CHEVROLET CAMARO SS (two-time winner this season; No. 1 qualifier in Charlotte four-wide; second in points): “I’ve always loved racing in Denver. I’ve done well here so Denver must like me racing here, too. The fans are great and it’s a great show with Bandimere tucked into the mountain here. Hoping to add to those numbers, come up with a big win not just for me but for my sponsors. It’s going to be an exciting weekend especially with the night racing.”

ROBERT HIGHT, JOHN FORCE RACING, AUTO CLUB OF SOUTHERN CALIFORNIA CHEVROLET CAMARO SS (runner-up in two races, winner at Houston; No. 1 qualifier in Las Vegas four-wide; four-time winner at the track): “This Auto Club Chevy team is working hard. All the crew guys, Jimmy Prock, Chris Cunningham, they’re putting in the work. It was a long break, but we took advantage of the time, the team got a lot of work done at the shop to set us up for the three-race Western Swing. I enjoy the back-to-back race weekends, it gives teams and drivers a chance to get in a rhythm, get some momentum.”

B. FORCE, CAPPS, ANDERSON AND A. SMITH CLAIM NO. 1 SPOTS AT NHRA SONOMA NATIONALS