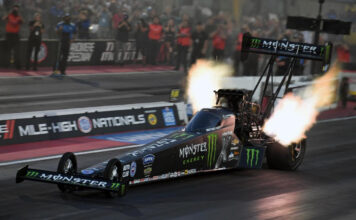 MORRISON, Colo. (July 18, 2021) – There won’t be a sweep of the National Hot Rod Association (NHRA) Western Swing for John Force Racing in 2021, but the three-car team started the series of three races in three weeks with solid efforts at Bandimere Speedway.

Brittany Force reset the track Top Fuel elapsed time record with a pass of 3.717 seconds in the Monster Energy Chevrolet dragster to earn her third No. 1 qualifier honor of the season, 21st of her career and first at the strip.
Bandimere Speedway is the 18th different track at which Force has qualified No. 1 and it is the ninth track where she holds the elapsed time record. Force won her first-round match but fell in the second round by a scant four-thousandths of a second.

﻿“Leaving Mile-High Nationals in third (in standings) and on a high note. This Monster Energy team picked up another No. 1 qualifier, a track record and six qualifying bonus points,” she said. “This weekend is not slowing us down. It’s only pushing us to the edge of wanting it more.”

Teammate and team patriarch John Force, an eight-time winner at the mountain venue, lost in the second round of Funny Car competition. Force, a two-time winner this season, was the No. 5 qualifier in the PEAK/BlueDEF Platinum Camaro SS.

In the first round, Force dispatched teammate Robert Hight, the No. 10 qualifier in the Auto Club of Southern California Camaro SS. Hight is a four-time winner at the strip southwest of Denver.

“It sucks racing a teammate; you’re supposed to do that at end of the day,” Force’s crew chief, Danny Hood, said. “We had to get after it because you know Jimmy (Prock, Hight’s crew chief) is going to do the same.”

John Force is the only Funny Car driver to sweep the Western Swing, earning the distinction in 1994. John Force Racing has a combined sweep to its credit in 2016 when Hight won in Denver, Courtney Force prevailed in Sonoma and John Force wrapped up the victory in Seattle.

Chevrolet Pro Stock drivers will rejoin the schedule July 23-25 at Sonoma Raceway in California for the NHRA Sonoma Nationals. Greg Anderson sits atop the standings with reigning champion Erica Enders in second. Both have two wins. FS1 will telecast eliminations live at 4 p.m. ET July 25.

Scott Libersher of Wilmington, Illinois, advanced to the semifinals of Super Stock in his COPO Camaro.

BRITTANY FORCE, JOHN FORCE RACING, MONSTER ENERGY/ FLAV-R-PAC CHEVROLET DRAGSTER (No. 1 qualifier, fell in second round): “Leaving Mile-High Nationals in third (in standings) and on a high note. This Monster Energy team picked up another No. 1 qualifier, a track record and six qualifying bonus points. We hit our marks, our numbers. The team did their job, I did my job, and the car did exactly what we wanted it to do. We just got beat. It was a great drag race for the fans. This weekend is not slowing us down. It’s only pushing us to the edge of wanting it more.”

JOHN FORCE, JOHN FORCE RACING, PEAK/BLUEDEF PLATINUM CHEVROLET CAMARO SS (No. 5 qualifier, fell in second round): “The mountain is always as struggle for any team coming up here with the altitude. But this PEAK/BlueDEF team survived it. Only went a couple rounds but still good. Now we go down to Sonoma, and we’ll see how that goes. I’m happy with this team, young team, to me at least. They’re really good, really coming around with Daniel Hood and Tim Fabrisi and Joe Barlam. I’m really enjoying being with these guys.”

ROBERT HIGHT, JOHN FORCE RACING, AUTO CLUB OF SOUTHERN CALIFORNIA CHEVROLET CAMARO SS (No. 10 qualifier, fell in first round to John Force): “Little bit of a rocky weekend for the Auto Club team. We’re used to getting after it and we just missed it a couple times whit weekend. Luckily, we are right on to the next race, and we can turn things around. Sonoma has been good to this team in the past. Hopefully, that’s the case this year, too.”