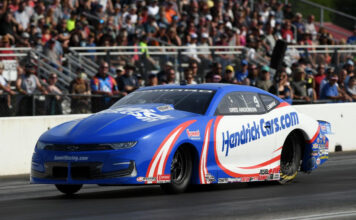 DETROIT (July 22, 2021) – Two years ago in Victory Circle at Sonoma Raceway, Robert Hight and Greg Anderson congratulated each other for their respective milestone wins.

Hight, the No. 1 qualifier in the Auto Club of Southern California Chevrolet Camaro SS, swept the elimination rounds to become the third Funny Car driver in National Hot Rod Association (NHRA) history to post 50 career wins. Anderson won his second consecutive Pro Stock race of the Western Swing and 93rd of his career in the KB Racing Camaro SS.

Both drivers will aim to reach other milestones this weekend in the NHRA Sonoma Nationals at the scenic venue in Northern California. The event, which was not held in 2020 because of the COVID-19 pandemic, serves as the challenging central point of the Western Swing. Pro Stock racers rejoin the schedule after a three-week break.

Anderson, a two-time winner this season, seeks to tie Warren Johnson’s 97 career victories, which stands as the most in Pro Stock and second behind John Force’s NHRA-record 153. Hight is tied with Joe Amato for 12th on the all-time NHRA list with 52 wins.

“It seems like an eternity since we’ve raced,” said Anderson, who joined KB Racing teammates in testing last week at Darlington Dragway in South Carolina. “I’m itching to get back in the car.”

Anderson, the No. 1 qualifier in six of the seven Pro Stock races in his HendrickCars.com Camaro SS, advanced to the final round in each of the past two races but “couldn’t close the deal” to tie the win record of his mentor.

“I know it’s coming, so the only pressure I have is the pressure I put on myself. I have confidence in my team, the car and even my driving,” said Anderson, a six-time winner at Sonoma. “All the arrows are pointing up.”

The smooth Sonoma Raceway surface, mild ambient temperature with low humidity and running at sea level are ingredients and inducements for record-setting runs. On July 29, 2017, Hight set the NHRA national Funny Car speed record at 339.87 mph at the track.

“I’m feeling good coming into the weekend. I really like the back-to-back races. You start to get into a rhythm, you can quickly move on from a bad weekend, you can ride out momentum and make some moves in the points. Hoping we repeat history here this weekend and get this Auto Club Chevy in the winner’s circle,” said Hight, who has won the past two Funny Car races at the facility that has seen its share of memorable moments since hosting its first NHRA national event on July 31, 1988.

In 1990, Force claimed the first of eight Funny Car wins in Sonoma (the most of any NHRA racer). Fourteen years later, Courtney Force became the winningest female driver in Funny Car history after defeating her father.
John Force, who sits second in the Funny Car standings, is taking aim at his record-extending 17th NHRA championship.

“We survived the mountain. Dodged a bullet, didn’t lose any ground in the points standings,” said Force, who has two wins and a runner-up finish in eight races. “I have to work hard to keep up, keep up with this PEAK Chevy and keep up with the competition, but I’m having a good time. Enjoying being with my team and really competing.”

Brittany Force, coming off her third Top Fuel No. 1 qualifier honor of the season in the Flav-R-Pac Chevrolet dragster, is aiming for her first win at Sonoma Raceway.

BRITTANY FORCE, JOHN FORCE RACING, FLAV-R-PAC CHEVROLET DRAGSTER (Three-time No. 1 qualifier; runner-up in Charlotte and Norwalk; No. 1 qualifier in 2014 at track): “Heading straight to Sonoma, race number two in this three-in-a-row Western Swing. I like getting back into the seat with a short turnaround time. As a driver, it keeps me mentally in the game and focused. I’m feeling good about this weekend. Our car has been hitting it’s marks, David Grubnic, Mac Savage and all the Flav-R-Pac guys have worked hard, and a win is coming.”

JOHN FORCE, JOHN FORCE RACING, PEAK/BLUEDEF PLATINUM CHEVROLET CAMARO SS (two-time winner this season; No. 1 qualifier in Charlotte four-wide; eight-time winner at track): “We get to keep things going this weekend. The Western Swing is something special, three races in a row all on the West Coast. The teams stay out on the road, it can be a long three weeks but hopefully we come out of it with a couple wins and the points lead. That’s what we’re out here for.”

ROBERT HIGHT, JOHN FORCE RACING, AUTO CLUB OF SOUTHERN CALIFORNIA CHEVROLET CAMARO SS (runner-up in two races, winner at Houston; No. 1 qualifier in Las Vegas four-wide; three-time winner at track): “Sonoma is a home race for me. I’m from Alturas, California, not too far from there and have been to every national event, first as a fan, then as a crew guy and now as a driver. Sonoma Raceway is special to me in that way. It’s also special because this is where this Auto Club team set the national speed record. I’ve also had a couple No. 1 qualifiers and won the last two times we’ve raced here.”

GREG ANDERSON, KB RACING, HENDRICKCARS.COM CHEVROLET CAMARO SS (two-time winner this season; No. 1 qualifier in six races; points leader; six-time winner at track): “I know (record-tying win No. 97 is) coming, so the only pressure I have is the pressure I put on myself. I have confidence in my team, the car and even my driving. I feel good about it. All the arrows are pointing up. We tested at Darlington last week, got to try out some new things and just get back in the car.”

ERICA ENDERS, ELITE MOTORSPORTS, MELLING PERFORMANCE/ELITE MOTORSPORTS CHEVROLET CAMARO SS (two-time winner this season; second in points; reigning series champion): “I’ve never won at Sonoma and I’m just really hopeful that we’re able to throw up some good numbers on the board and park that Melling Performance car in the winner’s circle. The competition is stout. Every weekend our backs are going to be against the wall, but that’s what is so exciting about Pro Stock is that anybody can win any given Sunday. It’s going to be crucial to perform the best you can and position yourself the best you can for the Countdown to the Championship. I’m ready to get back on track at Sonoma.”

TROY COUGHLIN JR., ELITE MOTORSPORTS, JEGS.COM/ELITE MOTORSPORTS CHEVROLET CAMARO SS (runner-up in season opener; transferred to final quad at Charlotte): “Being a part of Elite Motorsports, you know you’re always going to have the best car, power and crew. The guys in the engine shop never stop figuring out ways to make these motors sing. The chassis is constantly being tweaked. The clutch and suspensions are always fine-tuned. It’s a relentless pursuit. As such, I always try to be that precise with my driving. It’s the best way I know to say thank you to everyone that works around the clock to make us successful.”

KYLE KORETZKY, KB RACING, LUCAS OIL CHEVROLET CAMARO SS (first-year driver; semifinalist at Houston and Norwalk): “I tested with KB at Darlington (Dragway) last week and did a little bracket racing to keep me in the racing loop. Testing was huge for me. We tested a few new things, which went well, and just confidence in my driving, trying to stage better, hit the staging procedure better. All that is what you learn in testing because when you’re qualifying and racing that kind of goes out the window. In a Pro Stock car, you just can’t go to a local track and make runs. There’s a lot more to it. I’ve never been to Sonoma, so it’s a new one on my list. Going there after testing, I’m confident we can qualify in the top half of the field. I think we’ll do really well. I’m ready to back in this weekend.”

DALLAS GLENN, KB RACING, RAD TORQUE SYSTEMS CHEVROLET CAMARO SS (first-year driver; winner at Charlotte four-wide): “I’ve learned a lot about patience. I’ve learned to take it back a little bit and have fun and just drive the car the way that I know how.”