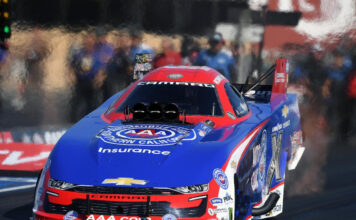 DETROIT (July 29, 2021) – With his fourth Wally in hand from Sonoma Raceway, Robert Hight and the Automobile Club of Southern California Chevrolet Camaro SS Funny Car crew head to another California venue where he’s had similar success.

The Lucas Oil NHRA Winternationals at Auto Club Raceway at Pomona, which traditionally kicks off the National Hot Rod Association (NHRA) season, was postponed because of state COVID-19 guidelines. Now the event this weekend will be the 10th of the NHRA Camping World Drag Racing Series season. Teams will return to the facility Nov. 11-14 for the Countdown to the Championship finale.

“Heading to Auto Club Raceway, that’s our home track – where John Force Racing’s home is and my sponsor the Automobile Club of Southern California – and it’s going to be a little different. We don’t normally race there in the summertime,” said Hight, who has recorded five victories between the twice-yearly races at the track.

Hight’s victory at Sonoma – his second of the season and 53rd of his career — lifted the three-time Funny Car champion to third in the Funny Car standings.

“We’ve started to find our stride. Jimmy Prock and Chris Cunningham had this Auto Club Chevy running on a string,” Hight said. “Hopefully, we’re going there with a little momentum and keep this rolling.”

Team owner John Force, who also has two wins this season in the PEAK/BlueDEF Platinum Camaro SS, is fourth in points. He is the Funny Car leader with a whopping 16 wins and 16 No. 1 qualifier honors at the track, and most recently was the runner-up in the 2020 Winternationals.

“This PEAK Chevy team is still very much in this fight. There’s only a handful of points separating the top five, I’m still in that top five,” Force said. “We’ve had a good season. There’s always ups and downs, but these young guys with
Daniel Hood and Tim Fabrisi, they’re working hard and we’ll be right back at it.”

Greg Anderson continues his pursuit of tying Warren Johnson’s 97 career victories, which stands as the most in Pro Stock and second behind Force’s NHRA-record 153. Anderson, the No. 1 qualifier in seven of the eight Pro Stock races in his HendrickCars.com Camaro SS, is tied with Bob Glidden for the most in the class with 12 wins at the track.

“It was a good weekend for us in Sonoma, but it could have been better,” said Anderson, the class points leader. “We’ve got a little steam, and I’m confident we can build on that.”

Brittany Force, the No. 1 qualifier in Top Fuel the past two races and four times through nine events in the Flav-R-Pac Chevrolet dragster, is looking for her first victory of the season. Force was the top qualifier in the 2020

Winternationals and reset the track Top Fuel speed record of 336.26 mph. She wrapped up the class championship with a win in the 2017 finale at the track.

BRITTANY FORCE, JOHN FORCE RACING, FLAV-R-PAC CHEVROLET DRAGSTER (four-time No. 1 qualifier; runner-up in Charlotte and Norwalk; third in points): “We’ve had great performance at our last couple races. Unfortunately, we’ve just come up short, made some mistakes but we are keeping heads up. Luckily, with this three in a row Western Swing, we get to head right into the next race. Wrapping up the Western Swing at my home track, Auto Club Raceway at Pomona. This is my home track and a track I’ve had some success at in the past. I’m looking forward to getting this Flav-R-Pac dragster qualified in the show and going rounds on race day. This team is looking to turn our luck around this weekend.”

JOHN FORCE, JOHN FORCE RACING, PEAK/BLUEDEF PLATINUM CHEVROLET CAMARO SS (two-time winner this season; No. 1 qualifier in Charlotte four-wide; fourth in points; 16-time winner at the track): “This race is home. We’re just down the way in Yorba Linda. We used to be completely based out in Southern California now there’s the museum, corporate offices and where we run John Force RaceStation as well as our rentals. There’s a lot of history in Southern California for me. Racing in Pomona, it’s a big event. Stands will be packed, even though it’s going to be warm. It’ll be a good summer show for them. I’m looking forward to getting in my PEAK Chevy at home.”

ROBERT HIGHT, JOHN FORCE RACING, AUTO CLUB OF SOUTHERN CALIFORNIA CHEVROLET CAMARO SS (two-time winner and two-time runner-up; No. 1 qualifier in Las Vegas four-wide; third in points; holds track Funny Car speed record of 336.99 mph, set in February 2018): “It’s an important weekend, all the upcoming races are important, with the Countdown just a couple races away, how close the competition is in Funny Car, we have to stay dialed in. It’s going to be an interesting weekend, racing in Pomona in the summer. Looking forward to getting this Auto Club Chevy in the winner’s circle at their home track.”

GREG ANDERSON, KB RACING, HENDRICKCARS.COM CHEVROLET CAMARO SS (two-time winner; No. 1 qualifier in seven of eight races; points leader): “It’s a little bittersweet to have a fast race car like this HendrickCars.com Chevrolet and not walk away with a trophy on Sunday, but it just makes you that much hungrier. I love these back-to-back races, because you get a little momentum, you get into a rhythm, and you get another chance if things don’t go your way. I’m proud of our team – the KB Racing crew was great all weekend – and we’re all licking our chops to get to Pomona.”

AARON STANFIELD, ELITE MOTORSPORTS, JANAC BROTHERS CHEVROLET CAMARO SS (two-time winner this season; second in points): “It was a tough (list) of competitors to go through (at Sonoma). My guys did a great job. They all gave me a great race car. The KB cars keep coming and so do the Elite cars. There’s a bunch of great drivers out here right now and a bunch of new blood. We’re all very hungry to get out here and win. It’s fun to come out and compete.”

TROY COUGHLIN JR., ELITE MOTORSPORTS, JEGS MAIL ORDER CHEVROLET CAMARO SS (runner-up in season opener; transferred to final quad at Charlotte; semifinalist at Sonoma; first Pro Stock appearance at track): “The last time this team raced Pomona at the Winternationals, Uncle Jeg (Coughlin) was driving this car and they took home the trophy, so there’s nothing but positive energy coming from So-Cal. The way it worked out Pomona is part of the Western Swing this year, so this race is going to be another memorable one at a place that’s given us so much history. We have everything here to win and I’m already looking forward to Pomona.”

KYLE KORETZKY, KB RACING, LUCAS OIL CHEVROLET CAMARO SS (first-year driver; semifinalist at Houston and Norwalk; No. 2 qualifier in last race; first Pro Stock appearance at track): “Racing for the first time at Pomona is huge for me and our sponsor Lucas Oil – the title sponsor for the weekend. No. 2 qualifier last weekend was great and I’m confident. My driving last weekend wasn’t very good; losing on a holeshot to a teammate was disappointing. The quick car is going to be there and the driver just has to have his head on straight.”

DALLAS GLENN, KB RACING, RAD TORQUE SYSTEMS CHEVROLET CAMARO SS (first-year driver; winner at Charlotte four-wide; runner-up at Sonoma; first Pro Stock appearance at track): “I’m feeling real comfortable in these things. They are so much fun to drive once you get used to them and I feel like I can go out there and focus on what I need to do.”