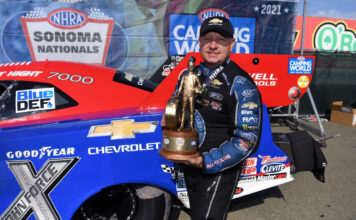 “Told you,” Hight said after driving the Auto Club of Southern California Chevrolet Camaro SS to passes of 3.938, 3.938, 3.943 and finally 3.971 seconds to win for the third successive time and fourth overall at Sonoma Raceway. The event was not held in 2020 because of the COVID-19 pandemic.

Equally consistent in the Janac Brothers Chevrolet Camaro SS, Aaron Stanfield earned his second Pro Stock Wally of the season and third of his emerging career.

Hight got past fellow NHRA Funny Car champions J.R Todd, Ron Capps and Matt Hagan to claim his 53rd career victory, which broke a tie with Joe Amato for 12th on the all-time NHRA list, in his 84th final round. He was confident heading into his 38th meeting with Hagan, who won a week earlier at Denver.

“Just the way this Auto Club Chevy has been running all day long,” said Hight, who picked up his second Wally of the young season. “(Crew chiefs) Jimmy (Prock) and Chris (Cunningham) have this thing running on a string. We’ve got good luck here. We had lane choice every round, so I just have a lot of confidence in my team.”

Hight’s victory was the 145th for Chevrolet in Funny Car competition.
Brittany Force recorded her fourth No. 1 qualifier in nine races this season – second in a row — and 24th of her career with a run of 3.694 seconds in the Flav-R-Pac Chevrolet dragster. She posted the top speed of race day at 330.720 mph in the first round of eliminations but hazed the tires in the second round and was sent to the sideline.

John Force qualified fifth in the PEAK/BlueDEF Platinum Camaro SS and entered race day second in the Funny Car standings. The 16-time Funny Car champion lost in the first round.

“It was a tough (list) of competitors to go through,” said Stanfield, 25. “My guys did a great job. They all gave me a great race car. I drove halfway decent today and it all came together and we’re pretty pumped.”

Stanfield dispatched Pro Stock points leader Greg Anderson in one semifinal. Anderson, driving the HendrickCars.com Camaro SS, claimed his seventh No. 1 qualifier honor for the seventh time in eight races this season and 113th in his career (third all time to Warren Johnson and John Force). Anderson is aiming to tie Johnson’s 97 career wins for most in the category and second to Force’s NHRA-record 153.

Justin Lamb was runner-up in Stock Eliminator in his Chevrolet COPO Camaro.

YOU SAID BEFORE THE FINAL THAT YOU WERE GOING TO STOP MATT HAGAN. WHY WERE YOU SO SURE?
“Just the way this Auto Club Chevy has been running all day long. Jimmy (Prock) and Chris (Cunningham) have this thing running on a string. We’ve got good luck here. We had lane choice every round, so I just have a lot of confidence in my team. I have to have confidence in myself. It’s been an unbelievable weekend and we’re headed to Auto Club Raceway now.”

YOU HAD TO GO THROUGH A LOT OF BIG NAMES TO GET HERE.
“It’s pretty tough out here. Even Steven Densham, his dad, Gary Densham, is a cagy old veteran and you’ve got to be on your game But Jimmy Prock, Chris Cunningham, they really brought their A game. I think we learned some things this weekend, and maybe this Auto Club Chevy is back.”

DO YOU THINK IT BRINGS OUT THE BEST IN YOUR TEAM WHEN YOU GO AGAINST CHAMPION AFTER CHAMPION THROUGHOUT THE DAY?
“It definitely does. You’ve got to rise to the occasion and these guys are all great. You look at the top eight in Funny Car, any one of these guys can win a championship and most of them are champions. It’s a tough class and a lot of fun when you can get here and stand on the stage at the end of the day. This is three in a row here at my home racetrack. When I first started race here, I couldn’t do anything, couldn’t get it done. We’d qualify well but couldn’t seal the deal on Sunday. The last three, boy, we have dominated and it’s a lot of fun.”

TELL ME ABOUT THE FIRST TIME YOU VISITED THIS RACETRACK BEFORE YOU WERE DRIVING A RACE CAR.
“1988, the first national event ever here, that’s when I fell in love with this sport. I just knew that this was what I wanted to do. Never thought I’d get to drive one of these things, but when I was a kid I wanted to be a mechanic and learn about these cars. A guy named Roger Primm from Reno, Nevada, close to where I used to live, gave me the opportunity and then John Force. I’ve been with John now for 26 years and to think that I came here to watch a race and now I get to drive one of these things and win. Very lucky guy. You look at what we had to do today. There are no easy rounds. Funny Car is a very tough class. Steven Densham first round, his dad is actually who I took over driving for. A great racer for a lot of years. So, you’ve got to go up there with you’re a game and get the job done. Then after that you race three world champions in a row. It’s fun. They bring out the best in us. I really think that Jimmy Prock and Chris Cunningham stumbled on to some things this weekend. We hadn’t had a lot of consistency this year. We won a race and been in some finals, but no consistency. This is our best weekend by far and it’s happening at the right time. Pretty soon we’re going to have the U.S. Nationals – the biggest race of the year – and the Countdown. This is where you really want to start shining and getting your act together. Heading to Auto Club Raceway next weekend, that’s our home track – where John Force Racing’s home is and my sponsor the Automobile Club of Southern California – and it’s going to be a little different. We don’t normally race there in the summertime; we race there at the beginning of the year in February and end the season in November. Hopefully, we’re going there with a little momentum and keep this rolling.”

GIVEN YOUR RELATIONSHIP WITH THIS TRACK, DID YOU PUT MORE PRESSURE ON YOURSELF OR DID YOU LOOK AT THIS AS AN OPPORTUNITY?
“Definitely an opportunity. Once you win a race at a certain facility, win the U.S. Nationals, win a championship, you know you can do it. So now you have confidence. The first few years I came here, we would qualify well but never raced well. I couldn’t hardly win a round at this place. I think I’ve won here four times, but three in a row that’s pretty impressive.”

WHERE WOULD YOU RANK THIS AMONG YOUR WINS?
“It’s right up there. It’s at what I call my home track and we’re fighting to get up in the points. This was a big day in points for us. Bob Tasca the points leader went out early. My boss, right behind Tasca, went out. We beat J.R. Todd. Everybody that we beat from second round on was ahead of me in points. So, this was a big points day for the Auto Club team and that’s exactly what we have to keep doing. We want to go into this Countdown No. 1, and I don’t see that as a problem if we race and do the things we know how to do.”

IS IT NICE TO PEAK AT THE RIGHT TIME?
“It is. It’s what you have to do. I’ve had years where we started out on fire, win a lot of races and just go flat. And I’ve had years where we can’t do anything early in the year and get it together when it really counts like 2009, my first championship. I will say, 2019, the last championship I won, we were good from start to finish. It’s satisfying. Really, you want to be good every race and we’ve had some flashes of brilliance, but we’ve also had some inconsistency. Hopefully we’re on the right track.”

HOW COOL IS IT TO PASS A LEGEND LIKE JOE AMATO ON THE ALL-TIME WINS LIST? “I can’t even believe that’s possible because Joe Amato for the longest time was the winningest Top Fuel driver. Race wins, round wins. He’s since been passed by Larry Dixon and Tony Schumacher but watching him all those years he just dominated Top Fuel. And to say I have more wins than he does, that’s almost not even believable.”

WHAT RUN TO DO YOU THINK SET YOU UP FOR THIS PERFORMANCE IN THE FINAL?

“That’s tough to say; every run is important. The guys did a great job with the hot rod today. I always say everything has to come together to win and today it came together. It’s a good day.”

YOU WENT THROUGH A MURDER’S ROW TODAY.
“It was a tough (list) of competitors to go through. My guys did a great job. They all gave me a great race car. I drove halfway decent today and it all came together and we’re pretty pumped.”

YOU GET PAST GREG ANDERSON, TAKE A BREATH AND HAVE TO RACE ANOTHER ONE OF THE KB GUYS.

“The KB cars keep coming and so do the Elite cars. There’s a bunch of great drivers out here right now and a bunch of new blood. We’re all very hungry to get out here and win. It’s fun to come out and compete.”

IS THERE ANOTHER CLASS YOU WANT TO TRY?

“For now, I’d like to win a championship in Pro Stock. You never know; I wouldn’t mind going 300 mph once or twice. But Pro Stock is my home for right now and it’s where I plan on staying.”

JOHN FORCE, JOHN FORCE RACING, PEAK/BLUEDEF PLATINUM CHEVROLET CAMARO SS (No. 5 qualifier, fell in first round): “Wasn’t our weekend over at the PEAK Chevy. It was a good weekend for John Force Racing, though. Brittany with the Flav-R-Pac and Monster Energy getting another No. 1 qualifier and Robert with the Auto Club picking up the win. We are all up there in points, all in the top five. That’s a good spot to be and now we get to chase another win at home.”