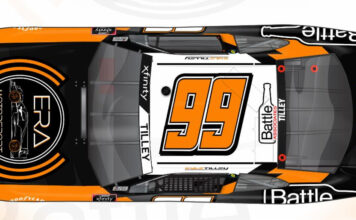 INDIANAPOLIS, Ind., (August 2, 2021) – Rolex 24 At Daytona winner Kyle Tilley is set to make his NASCAR Xfinity Series debut this weekend at Watkins Glen International with BJ McLeod Motorsports, with Era Motorsport proudly supporting the effort. Era Motorsport, a professional sports car and vintage racing team will sponsor Tilley in back-to-back races at Watkins Glen International in the Screwball Peanut Butter Whiskey 200, and at Indianapolis Motor Speedway for the Pennzoil 150 at the Brickyard.

“It’s really exciting to have Era on board with me for my Xfinity debut,” said Tilley. “I look forward to representing them in a new area of the sport. Stepping into the Xfinity Car for the first time without practice or qualifying will be intense, but also a great opportunity to learn the different track configuration used by NASCAR. I’ve only ever driven the IMSA spec road course, so it will be a double challenge with a new car and new track, and I love a good challenge! I’ll definitely be cheering on my Era co-drivers Ryan and Dwight taking on Road America in the LMP2 while I pedal some cars at Watkins Glen!”

In addition to racing in the IMSA WeatherTech SportsCar Championship, Asian Le Mans Series, European Le Mans Series, and several historic series all in the 2021 season, Tilley made the jump into the NASCAR Cup Series, announcing a four-race effort with Live Fast Motorsports. With two races complete, Tilley will continue his Cup Series commitments with Live Fast Motorsports, doubling up to also race in the NASCAR Xfinity Series for the two back-to-back events.

Battle Associates, one of the largest beverage packaging companies in the Southeastern United States, will also support the effort. Battle Associates provides sustainable and recyclable packaging, even providing products made from recycled content. Battle also sponsors Tilley’s Cup racing effort, sponsoring the No. 78 Mustang with another one of Era’s sponsors, Bremont Chronometers. Based in England, Bremont Chronometers engineers beautifully crafted, precise, and durable mechanical wristwatches, keeping the drivers and crew of Era Motorsport on time and looking stylish in the process.

In addition to acting as the primary sponsor of the No. 99 Camaro, Era Motorsport will take a small supporting sponsorship role on his NASCAR Cup Series No. 78 Mustang for the Go Bowling at The Glen as well. The Cup Series race will begin on Sunday, August 8 at 3:00 PM Eastern, airing live on NBCSN. The NASCAR Xfinity Series’ Screwball Peanut Butter Whiskey 200 will air live on Saturday, August 7 on CNBC at 4:00 PM Eastern. Visit nascar.com for all event information.

Though a young team in professional sports car racing, Era Motorsport has quickly carved their own path in their sophomore season, making international headlines when, with drivers Kyle Tilley, Dwight Merriman, Ryan Dalziel, and Paul-Loup Chatin, they clinched the victory at the prestigious 2021 Rolex 24 at Daytona in a fan-designed livery. The team went on to win the 2021 Asian Le Mans Series LMP2 championship title the following month before beginning their freshman season in the European Le Mans Series.

The weekend will be a busy one for Era Motorsport, also racing in the IMSA WeatherTech SportsCar Championship race at Road America, with drivers Dwight Merriman and Ryan Dalziel running the No. 18 Oreca LMP2 car in the two-hour, forty-minute race. The IMSA SportsCar Weekend will air live on NBC Sports Gold’s TRACKPASS, beginning at 1:40 PM CT on Sunday, August 8.

About Era Motorsport
Era Motorsport was formed in 2018 with the idea of providing unmatched excellence in historic racing. Just two years later, the team expanded to the world of professional sport car racing, fielding an Oreca 07 in the prolific IMSA WeatherTech SportsCar Championship and the 24 Hours of Le Mans. In 2021, the team went on to win at the iconic Rolex 24 At Daytona, in what was their second attempt competing in the event. Motorsport isn’t just a hobby, it is a way of life: a passion that is in the team’s blood. Whether you find us in the IMSA WeatherTech paddock with modern prototypes or chasing down lap records in our fully restored classic sports cars, or even globetrotting to experience historic F1 at some of the world’s most iconic circuits, Era Motorsport has something for everyone. In 2021, the team will return to the IMSA WeatherTech SportsCar Championship for the full LMP2 season and also contest in the full seasons of the Asian Le Mans championship and European Le Mans Series. For more information, visit eramotorsport.com.

About Bremont Chronometers
Bremont is an award-winning British company producing beautifully engineered chronometers at their headquarters in Henley on Thames, England. Each is designed to appeal to those who share their passion for, and appreciation of, the innovation and mastery behind a beautiful mechanical wristwatch. They hope you enjoy the same satisfaction when you try on a Bremont watch as they do in creating one.

About Battle Associates
David Battle founded Battle & Associates in 1977 to provide packaging solutions and support to food and beverage companies. He has served as president of the company since 1977 and been recognized with a multitude of awards for supply chain excellence and innovative packaging concepts that have led to meaningful growth and success of client beverages.