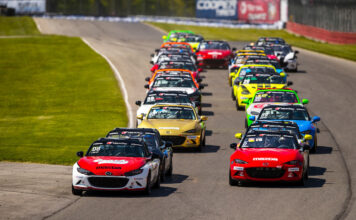 ELKHART LAKE, Wis. (Aug. 2, 2021) – It’s been 11 weeks since the Idemitsu Mazda MX-5 Cup presented by BFGoodrich® Tires was last on track. The wait for the Alana Long 100 at Road America has only heightened the championship suspense, with the top three separated by only 250 points.

With eight of the 2021 season’s 14 races in the books, 2020 Mazda MX-5 Cup Champion Michael Carter (No. 08 Carter Racing Enterprises) leads the points heading to Wisconsin.

In the most recent event at Mid-Ohio Sports Car Course, Carter had a tough weekend without a podium finish, but managed to still keep his points lead. However, his advantage is down to just 40 points ahead of Gresham Wagner (No. 5 Spark Performance).

Neither Carter nor Wagner have won at Road America in MX-5 Cup before. But the man sitting third in the championship, Selin Rollan (No. 87 Hixon Motor Sports) has. He is 250 points behind Carter, an easily surmountable gap considering each race offers a maximum of 380 points.

As we race into the second half of the season, Carter doesn’t plan on letting any thoughts of championship points affect his performance.

“I don’t let points factor into my decision making on track,” Carter said. “I go out there and do the best I can and let everything else work itself out.”

As the longest track (4.048 miles) on the Idemitsu Mazda MX-5 Cup schedule, Road America offers up some of the best drafting battles of the season. Fans can expect a race similar to Daytona with long lines of cars running nose-to-tail.

“Road America is so draft dependent in our cars that the only real way to get a competitive lap time is finding a draft,” Rollan said. “That would either be with a teammate or another group of cars you have to mooch off of.”

The length of the circuit also plays a large role in the mental chess game happening in each driver’s head.

“You definitely need to plan ahead, because a mis-timed move could cost you three, four or five places with the long straights,” Wagner said. “It’s definitely necessary to plan your moves out to keep your momentum up on the runs down the straightaway.”

Many past MX-5 Cup races at Road America have ended with cars drag racing up the hill from Turn 14 to the finish line on the last lap. That begs the question: do you want to be leading the race on the final lap?

“I think that comes to how your car has behaved in the race and how confident you are with your speed through the middle part of the track,” Wagner said. “If your car is working well through there you can outdrive the draft and hopefully have some battling behind you and have a small gap going onto the back straight that you can hang on to.”

Carter has a simpler approach.

“I’m just going to see where I end up when the white flag comes out and go from there,” he said.

Chris Nunes (No. 32 JTR Motorsports Engineering), who is fourth in the points, is coming off of a breakthrough first Mazda MX-5 Cup race win. He is followed in the points by two more rookies knocking on the door of their first race win; Sam Paley (No. 28 McCumbee McAleer Racing) is fifth, Luca Mars (No. 41 Copeland Motorsports) is sixth.

All rookies are competing for the $80,000 career advancement scholarship from Mazda for the Rookie of the Year, but they are also mathematically close enough in the points to take home the grand prize of $200,000 for the series champion.

Road America has been a mainstay on the Mazda MX-5 Cup racing calendar since the series began in 2006. To date, MX-5 Cup has held 20 races at the legendary road course. Since 2019, the doubleheader at Road America has been titled the Alana Long 100 in honor of the matriarch of the Long Road Racing family, a longtime partner of the MX-5 Cup series. Alana lost her battle with cancer in April of 2019. Road America was her favorite track.