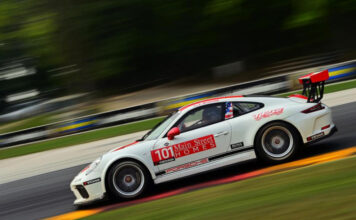 McClure drove the No. 101 Main Street Homes/TPC Racing Porsche 911 GT3 Cup to the runner-up position overall and in the Platinum Cup during Sunday’s 40-minute sprint race, holding the finish despite a one-lap dash to the checkered flag after a late caution.

That caution was the second of the race and set McClure up for one last challenge after following the leader from the opening lap. McClure went side by side with a competitor going hard on the brakes going into turn five and came through turn six still in position for the podium.

The silver medal came just one day after narrowly missing the podium with a fourth-place finish.

“I barely missed it yesterday,” McClure said. “I feel bad for Dave Brule, he got inside of me and just went off in turn five. It was great racing, I love racing with these guys. I wish we didn’t have that last yellow flag, I was checked out a little bit. But it was good. I love this track, Road America is just awesome. TPC Racing is awesome to work with. My coach, Spencer Pumpelly, kept me going. It was just a lot of fun.”

Pedro Torres’ Saturday race was equally as impressive. Coming through turn three in the No. 16 Stoneleaf/TPC Racing Porsche 911 GT3 Cup on the opening lap, Torres spun to avoid a car further up the grid that had done the same. In doing so, he fell all the way to the back of the 38-car field, then began a charge back to the front. At the checkered flag, Torres was fifth in the Gold Cup class, and 12th overall. He followed that up with a sixth-place finish on Sunday.

Rob Lorndale, driving the No. 6 TPC Racing Porsche 911 GT3 Cup, finished a strong seventh during Saturday’s race and earned a second top-10 with a 10th place finish on Sunday. Jordan Wallace finished two laps down on Saturday in the No. 35 Dasbold/TPC Racing Porsche Cayman GT4 Clubsport, but rebounded for a 10th-place finish of his own on Sunday. Both Lorndale and Wallace are in their first season of professional-level racing, holding their own and improving each event with TPC Racing.

Both Torres and Lorndale stuck around for the 65-minute charity race held on the Porsche Sprint Challenge weekends, finishing second and third in the Gold class and third and fourth overall, respectively, and donating to the Racing For Children’s charity to fight childhood cancer. Lorndale began the race before handing his car to Director of Race Operations, Harris Levitas, to run to the finish.

“That was a great weekend for all of us here at TPC Racing,” Levitas said. “We were able to bring all the cars home cleanly, and we got some great, great results throughout the weekend. Each one of our guys got better as the weekend went along, and I’m really happy for Vernon, Pedro and Rob, because they have podium photos to prove it. Each of the four are already thinking about getting back in the car and had a lot of fun, so that’s really what it’s all about.”