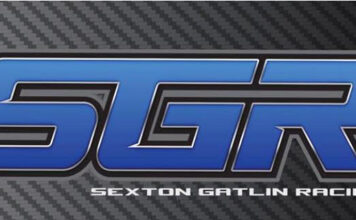 (Lakeside, CA, August 12, 2021) After five top five finishes in the 2021 season, David Bezio finally notched his first win of the year when he outdistanced the competition in the Lucas Oil POWRi Southwest Lightning Series race at the Barona Speedway last Saturday night.  The win was the fifth in a row for an SGR driver in the series.

Bezio was joined by SGR teammates Grant and Brent Sexton for the night of racing on the San Diego County clay oval.  Grant started the night off right for the team when he captured his heat race from the pole.  San Diego based Bezio started fourth in the same heat and came home second.  Brent started and finished seventh in the other heat.

For the main event, Grant, the current SWLS point leader, had the best starting spot for the SGR trio coming from the inside of row two.  Bezio was coming from the outside of the third row and Brent was on the inside of the seventh row.  A near disaster jumble negated the original start.  When the race got started on the second try, Grant found himself in third with Bezio immediately advancing to fourth.

It was evident early on that Bezio was the fastest car on the track.  He moved into third on the second lap and relegated teammate Grant back to third soon thereafter.

The race only saw the yellow flag rear its ugly head one time.  That was on lap six and it was a good signal for one SGR driver and a bad sign for another.  Bezio was able to pull to the rear end of the leader for the upcoming restart.  Simultaneously, Brent’s night came to an end when he dropped out of the race with a frustrating 12th-place finish.

Once the race restarted, it was only a matter of time before Bezio would take the lead.  He immediately went on the attack and secured the top spot before another lap was in the books.  Once in front, the final 14-laps were all Bezio and he happily claimed his first winner’s trophy of the year.  Grant ended up third.

Soon after the race concluded at Barona, SGR headed to the Midwest for the first ever “Lucas Oil POWRi Min-Kota Lightning Summer Shoot-Out.”  SGR’s effort there will include Brent, Grant and Dalton Sexton, cousin Shane Sexton, defending NASCAR Camping World Truck Series champion Sheldon Creed, and impressive SWLS rookie Braden Chiaramonte.  The action will begin on Thursday, August 12th at Minnesota’s Norman County Speedway.  The action will switch to South Dakota on Friday at River Cities Speedway.  Saturday and Sunday it will be back to Minnesota at the Greenbush Race Park and Buffalo River Speedway.

Fans who would like to watch the “Min-Kota” events can do so at the following PPV sites.  For Thursday and Saturday, the races will be on youtube/powri.com.  Friday’s event will be available at rivercitiesspeedway.tv and Sunday’s race can be viewed at fyetv.com