Ford Performance NASCAR: Spirit of Ford Winner Mose Nowland Was One of a Kind 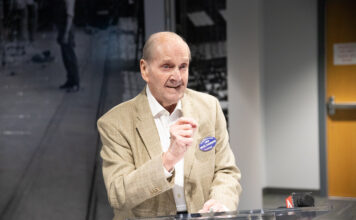 Chances are you’ve heard of the first five men on this list, but if it weren’t for the sixth, there’s a likelihood that none of them would have had as much success as they did in their legendary careers.

Thankfully, Nowland, who passed away August 13th at the age of 87, was the brains under the hood that kept Ford racing engines in a variety of different disciplines humming throughout a distinguished 57-year career.

“Mose was not just a friend, but someone who embodied the true spirt of our Ford racing program, said Edsel B. Ford II, a long-time supporter of Ford’s racing efforts. “He always met a challenge head on with a humble, can-do spirit that helped Ford win some of the greatest races in the world. After all his years at Ford, Mose dedicated his talent to help restore Clara and Henry Ford’s home — Fair Lane. I know my great grandparents are grateful. He will be missed in so many ways.”

Nowland got his first job at Ford in 1955 working on engine development, but was almost immediately drafted into the military and was forced to leave for a two-year tour. Upon returning to the company, he quickly established himself as one of Ford’s go-to persons for all things engine-related in racing.

It started in 1963 when he played a leading role in developing the “Cammer” engine that eventually carried Clark to Ford’s first Indianapolis 500 victory in 1965, and continued the following year when he helped Shelby and Ford win the first of two straight in the famed 24 Hours of Le Mans.

In fact, if it wasn’t for the expertise and ingenuity of Nowland, Ford’s first win in the iconic endurance race may not have happened in 1966 and the legendary story that is Ford v. Ferrari would not have materialized the way it did.

That’s because two days before the Ford GTs were to be shipped to France, an oil leak was discovered between the engine block and heads. It turns out the engine build team had run out of a special kind of twine that, in conjunction with a sealer, prevented the issue from occurring.

Nowland was informed of the problem and quickly theorized that a specific fishing line might serve as a reliable substitute. While in Charlotte inspecting engines on the Holman-Moody GT40s, he went to a local fishing store and bought out the entire supply of the fishing line needed. Sure enough, his creative solution worked and for the next 48 hours, after flying cross country and personally rebuilding the engines on no sleep at Holman-Moody and Shelby American, the cars were off to the race where they finished 1-2-3.

It wasn’t until halfway across the Atlantic Ocean on the way to France, Nowland realized “I was the last person to touch those engines. I’m not sure I relaxed after that until the checkered flag flew.”

As a momento of his whirlwind experience, which included staying awake and being on call for the entire duration of the race, Nowland couldn’t resist climbing up on the roof and taking the French flag that had been hanging over the team’s pit box as a souvenir. It turned out to be the only race souvenir he ever accumulated in more than 50 years with the company.

Nowland brought the French flag out of storage in 2016, and it returned with Ford to Le Mans, where the company once again captured victory, 50 years to the day of the first win.

“Mose was a legend in our Ford Performance world even today,” said Mark Rushbrook, global director, Ford Performance Motorsports. “The Ford victories he had a hand in during his career are things that anyone involved in the sport can only dream of. I’m grateful that I got a chance to meet him and all of us in the racing program are grateful for his contributions to our legacy.”

Nowland was a true genius when it came to engines and after those historic victories that still serve as a big source of pride for the company decades later, he helped fuel Ford’s return to prominence in NASCAR when the company returned to the sport in 1981.

“If you had a problem, there was nowhere else in the program that you went in that period of time but Mose Nowland,” said noted engine builder Ernie Elliott, who, along with brothers Dan and Bill, took the sport by storm in the eighties and won the championship with their No. 9 Ford Thunderbird in 1988. “No matter what the task was he was not afraid to get his hands dirty. He would listen to you and pay attention to the problems but wanted to see what the issues were himself.

“I think that was a big key because once he saw and understood what you were battling then he would go to bat for you and not let up until that particular part was done,” continued Elliott. “He was a true pleasure to work with and absolutely ranks as one of the best engineers I’ve ever worked with in my life.”

“Mose Nowland was a kind and caring gentleman that will be greatly missed,” said Doug Yates, CEO of Roush Yates Engines. “For 57 years Mose was part of the Ford family and led the way for Ford in racing. He was the original Ford “engine man” leading Ford’s efforts to win Le Mans and he led every Ford Racing initiative from Le Mans to Indy car to NHRA and, ultimately, to NASCAR where he helped us win races and championships every step of the way.

“Mose made every cylinder block, cylinder head and intake manifold that we raced until he retired from racing full time. He created a lasting legacy that everyone at Roush Yates is proud to carry forward. He will be missed but never forgotten.”

It was Nowland’s humbleness and calm demeanor that endeared him to everyone he crossed paths with and whereas he was viewed as a big deal by many of his contemporaries, he never viewed himself that way. In fact, he was so respectful that he often referred to people who would be considered friends in a formal sense. It was Mr. Ford or Mr. Gurney or Mr. Foyt.

It was 2005 and the annual NASCAR Cup Series Banquet was being held at the Waldorf-Astoria in New York City. Nowland and his wife, Marcia, had been invited to attend as part of the Ford contingent, but he didn’t understand why. It wasn’t until he was surprised at a pre-banquet reception with the Spirit of Ford Award on his 50th anniversary with the company, that the reason became clear.

In true Nowland fashion, he acted as if he was not deserving of Ford’s highest honor in racing, which recognizes lifetime achievement and contributions to the industry on and off the track. Tears welled up in his eyes and while he struggled to find words to express his appreciation, the look on his face made it clear to everyone in attendance just how much it meant.

Nowland officially retired from Ford in 2012, but he never stopped tinkering and making things with his hands. He immediately started volunteering at the Henry Ford Museum and the Ford Estate at Fair Lane in Dearborn, replicating parts and pieces that had long ago been discontinued.

“When he went to work at the Henry Ford Museum, we would always go and look through the windows in the back to see if he was there and then he would come out and talk to us,” recalled Len Wood, who, along with his brother Eddie, has carried on the Wood Brothers racing legacy the last five decades. “He’s one of those guys that could do anything. One of the last things I saw him making was a candlestick to match something that was 75 years old. He was making it out of a bar of bronze or something like that, but he had to heat it to color and age it. You just don’t find people like that every day. He was quite a fellow.”