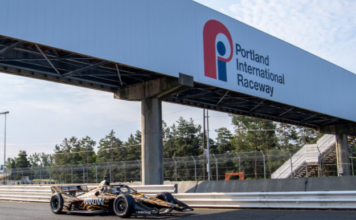 PORTLAND, Ore. (Sept. 2, 2021) – The championship battles are heating up as the 2021 motorsports season draws closer to its finish. Three races remain for the NTT INDYCAR SERIES and four for the ARCA Menards Series West with both featured next weekend at Portland International Raceway (PIR) during the Grand Prix of Portland, Sept. 10-12.

The ARCA Menards Series West will race first as the Saturday, Sept. 11th headliner with a starting time of 4:30 p.m. PDT for these stock cars. Then, the NTT INDYCAR SERIES will cap off an exciting Grand Prix of Portland weekend as the field takes the green flag at approximately 12:42 p.m. PDT on Sunday, Sept. 12th. Tickets can be purchased online now and the complete weekend schedule viewed at portlandgp.com.

The ARCA Menards Series West has the top four in its championship standings separated by just 14 points. Jesse Love leads the points battle by 11 over Cole Moore with Jake Drew and Todd Souza both 14 points back and tied at third in the standings. Love, the defending ARCA Menards Series West champion for Bill McAnally Racing, extended his points championship lead by winning the most recent race at Irwindale Speedway (Calif.).

“It definitely feels good to be the points leader! Our team has worked very hard this year to be our best. With the support of NAPA, we have that opportunity to work hard, so a huge thank you to them,” said Jesse Love, the 16-year-old driver from Menlo Park, Calif. “We are all on the same page right now and we want to be able to have our championship sealed before Phoenix. We can accomplish this, but we just need to keep our head down, be humble, work hard, and win races. With all the glory to God! ”

Featuring the stars and cars of the Indianapolis 500, the NTT INDYCAR SERIES saw a flip at the top of its season standings again after the most recent stop near St. Louis. Chip Ganassi Racing’s Alex Palou was atop the the standings after the four previous races including holding the positiion following eight of the 14 rounds on the season; however, Arrow McLaren SP driver Pato O’Ward took advantage of some recent misfortune by Palou and recaptured first by 10 points in the standings since last leading after the second race on the streets of Detroit in early June.

Team Penske’s Josef Newgarden has entered the championship fight sitting in third and only 22 points back of O’Ward after just notching his second win of the season. O’Ward, Palou and Newgarden all hold two race wins in 2021 with O’Ward and Palou both testing on the 1.964-mile, 12-turn PIR circuit on July 30th. O’Ward recently pointed to the Portland test after winning pole position on the Indianapolis Motor Speedway road course last month as a pivotal turning point to his and the team’s season.

“We had a great test in Portland. What we found there I knew was going to help us here. So the goal is definitely to truly return where we belong, which is contending for podiums, for poles, ultimately for wins,” said O’Ward. “We’ve had a quick car many places, but damn it’s a handful. It is so hard to drive. I think we found something that just is more predictable, that just makes it a lot easier on Felix (Rosenqvist) and I to actually get laps in lap after lap consistently.”

Two additional racing series are on the weekend schedule also bringing their own championship battles. The Road to Indy Presented by Cooper Tires returns to PIR with Indy Lights, the top rung of its open-wheel development ladder for aspiring NTT INDYCAR SERIES drivers, featuring doubleheader races on Saturday and Sunday. David Malukas leads the standings by a mere three points over Kyle Kirkwood. Featuring competitors age five and up in multiple classes, the USAC National .25 Midget Series will take the green flag at PIR for the first time on a temporarily constructed 1/20th mile-long course in one of PIR’s paddocks on Friday and Saturday.

Children 12 and under receive free general admission to the event. This also includes complimentary access to the NTT IndyCar Series Paddock throughout the weekend when accompanied by a ticketed adult. To enhance their experience further, the youngest fans can participate in the Grand Prix of Portland Rookie Racers. This immersive program, offering unique experiences throughout the race weekend, is on sale at portlandgp.com for a nominal fee.